Lady Gaga's prosthetics and new trend for Elf Ears: the world has got even madder 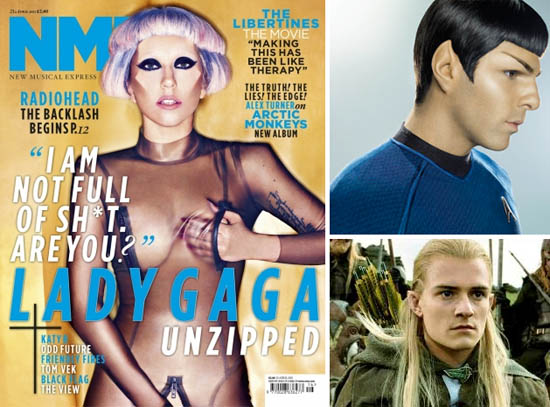 The world has officially got even madder than it was before if that were possible.

First we had Lady Gaga with her improbable facial growths.  They just grew, she insisted, and has refused to confirm that they are prosthetics.  Maybe she thought she could fool us into thinking that her new single, Born This Way,  does not once again copy the pants off Madonna?

And this week news of a new trend popped into our mailboxes from the farflung and crazy reaches of the good old L of A. When I say trend here I mean it in the loosest possible way.  I mean it in the same way that I believe that Lady Gaga didn't borrow those stick on face bumps from the props department of the Enterprise Holo Deck and did in fact grow them herself.

Anyway this trend is for Elf Ears.  Apparently films like Lord of the Rings have sparked such a copy cat frenzy among the deeply disturbed and nerdy amongst us that they are actually getting their ears shaped into pointy yokes in the misguided hope that they will somehow transform themselves into Orlando Bloom.

People it aint gonna happen.  And the situation is even more dire because the process is practically irreversable - it slices through capillaries, nerves and the like and is pretty serious.  One plastic surgeon has likened the process to dogs getting their ears docked - it's that stupid and that painful (he's also wittily called the process dobermanplasty).

Either of these appeal to you at all?  I can't decide!  Maybe I'll get them both!