So The Aniston reckons that her eating a Big Mac was akin to putting diesel in a refined system: cue much scorn and non approbation from the world at large.

Jennifer likes to live as clean and healthy a lifestyle as possible OR SO SHE SAYS.  Her figure is incredible, her hair is like nothing else in this world and her boyfriend isn't half bad either.  Despite all those daily break up stories and sources close to Jen telling us that she isn't happy just forget it haterz.  If I was Jen I'd be the happiest woman alive. 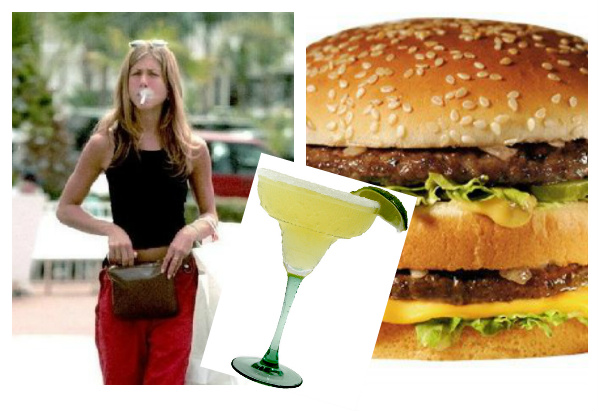 But she's NOT AT ALL as clean living as she likes to make out and we reckon she was over exaggerating about the princessy "refined system" comment. Sure, the Big Mac might have made her feel a bit dodge if she's not used to loading up on such a greasy meal BUT everyone knows Jen loves her fags and her millions of wines and Margaritas and her sun holidays in Mexico. She's a normal women, like the rest of us and although she's the face of Aveeno skincare now and has access to every anti ageing doo hickey known to modern science her life shows in her skin.

And there's nothing, not a thing, wrong with that.

So what do you reckon?  Does junk food make you feel ill and toxic or are you a total addict?  Let's poll and find out!