Taylor Swift Still Not Over Harry Styles: Have YOU Ever Been The Bitter Ex?

Last week's VMAs were a treasure trove of goodies, weren't they? We had Miley and her twerking, an *Nsync reunion and performances from all sorts of pop greats. In between all that, Taylor Swift revealed herself to be probably the worst ex in the world.

OK - so we already knew that. She writes whole albums about ex-boyfriends, for god's sake. But you would think after thrashing it all out on an album and then performing the songs night after night on tour she would be totally zen and free of any sort of grudges against past beaus. Not so.

Firstly, she was lamped on camera mouthing something a lot like "Shut the f*** up" when Harry Styles and One Direction graced the stage to collect an award. Secondly, when she went up to collect her own award for Best Female Video, she said:

"I also want to thank the person who inspired this song who knows exactly who he is because now I got one of these. Thank you so much."

The song in question is "I Knew You Were Trouble", which is reportedly about - you guessed it - Harry Styles. The passive aggression! It burns!

Of course her actions caused tons of Trouble and her current boyfriend Ed Sheeran has tried to explain away the STFU incident.  But even if she did direct her remark at Harry I think it's totally understandable. We all have that one ex we just can't help but feel bitter towards - Taylor just has to experience that rage-inducing, hackles-raising, bile-generating bitterness in front of the entire world. 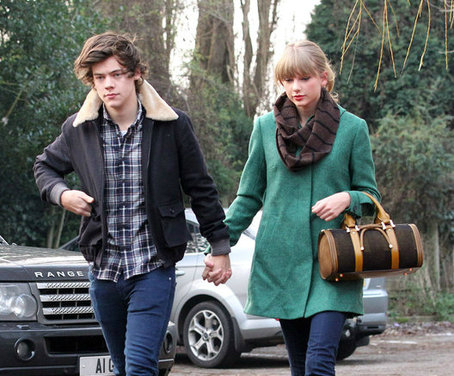 The couple in happier times.

Don't try to deny it. While you know you wouldn't go near them again in a month of Sundays, you also find yourself thinking about them frequently in the worst possible way. Maybe they treated you badly: neglected you, even cheated on you. Every so often you think about how you could have let yourself be treated that way. You're bothered by how much they still bother you, and that just intensifies the bitterness.

So when you see hear about them, that bitter resentment escapes out of you like water in cupped hands.

This clearly happened to Taylor that night. One look at Styles and she was just plain mad. She KNEW he was trouble when he walked in, but now he's here again and it's making all that trouble come rushing back - so she temporarily forgot to keep her cool. I feel you Swifty, I feel you.

Do you have an ex you just can't help but resent? Or are you able to just...let it go?