Come this way, dear reader, and let me bring you back to the halycon days of the noughties. Christina is getting dirrrrrrty on the radio, Nicole and Paris are living the simple life, the Sugarbabes are going through iterations one to three and Ricky Martin is shaking his bon bon.

Yes, the '00s were when we got really brash. We took the worst of the '90s and layered a style so sticky and artificial over the top that we ended up the human equivalent of those boiled-sweets-covered-in-fluff that you might find at the bottom of your handbag.

And we applied the same approach  to our hair - fluffy, artifical, sticky. Our tortured tresses had a lot to contend with. Justin would have had to work very hard to bring sexy back to some of the hairstyles we loved at the time.

Behold, the seven most hideous hair trends of the noughties. 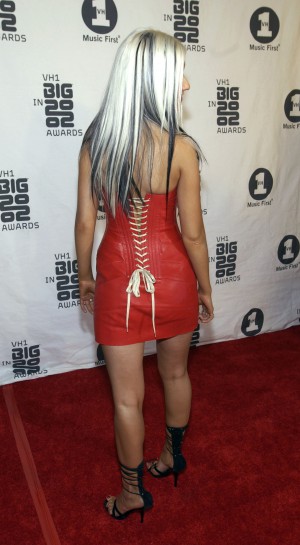 Christina went through quite the fedora/trilby/baker boy hat phase in the early years of this decade. But when she removed the hat, boy, there was a whole lot going on under there. 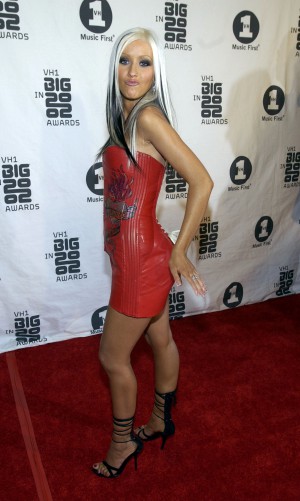 She leaves those All Saints in the ha'penny place. But I'll revisit those combat-wearing Saints in due course. 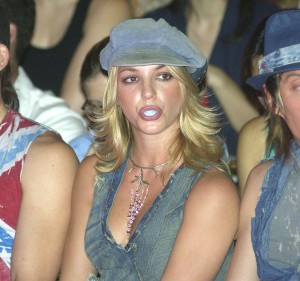 Meanwhile, 2002 Britney was at Fashion Week in New York giving us naughty noughties denim and heavily layered hair. And judging by the person just out of shot, we were wrong if we thought that it was just Justin Timberhair that she Double D co-ordinated with.

Yes, in 2002 we were all about the heavy layering; we were still weaning ourselves off The Rachel from the '90s in baby layered steps.

But some people took it too far. 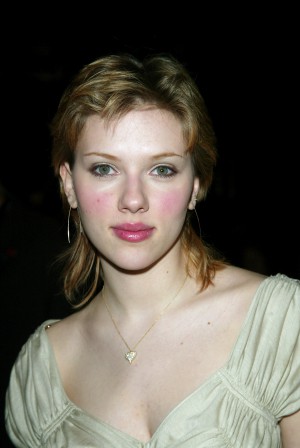 Scar-Jo went to NYFW 2003 with a mullet for company. We were all playing with layers and for some of us, it was like Edward Scissorhands owned the salon and the layers just went that little bit too far.

I wanted this to be a one-off for Scarlett and, well, for humanity. I wanted it to simply be a barnet blip, a hairy outlier and not an actual trend. But one of Team Beaut has admitted to sporting something similar without actually intending to and I discovered that Scar-Jo had suffered a similar follicular fate.

I'm sad to say that she brought her mullet to meet Matt Dillon at the 2003 IFP Independent Spirit Awards.

And we all ran to the hairdresser to ask for shorter, SHORTER I SAID, layers. 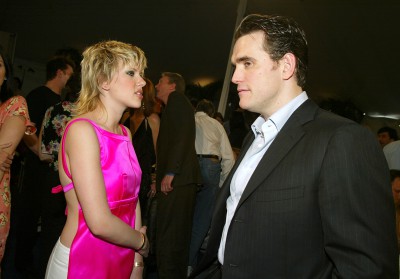 As an aisde, I also love this picture because I had a top exactly like this one. Bras were for the weak in the '00s. 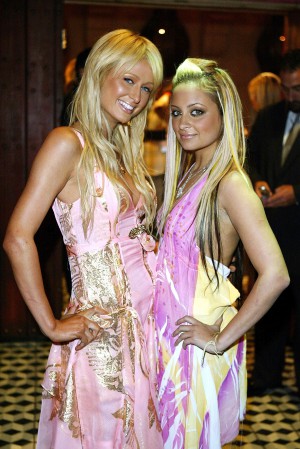 You could argue that Paris has super-mullet in this picture. Take another look, I defy you not to see that the 2004 Ms Hilton is styled like the love child of Billy Ray Cyrus and Malibu Barbie. Dear God, the more I look at the mullet, the more I cannot look away. It draws me in like a siren sea creature which is apt because it looks like a pale and hairy octopus was slapped right on the back of her head and all of its tentacles just dribbled down either side of her head.

But look away because Nicole Ritchie is the real queen of this picture. She is thrice crowned. She has the dodgy black and platinum thing going on, a delightful bump backcombed and hair sprayed that later gave birth to Snooki's mahoosive version and she has the straightest hair I ever did see.

It did not matter if you did not have a bona fide hair straightener. What did you think the iron was for? Sure even the fella in Savage Garden was at it. When he sang 'Truly Madly Deeply', he was referring to the burns on his ears from using his mother's iron to straighten those locks of his. 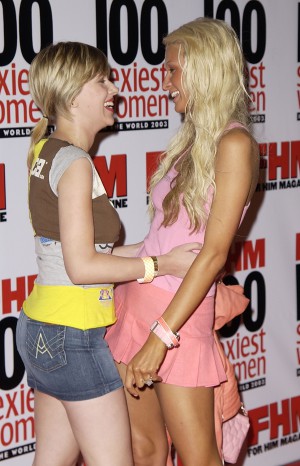 Judging from these pictures, it would appear that Paris and Scarlett were very socially active in the '00s. As were a plethora of first-generation, cheap 'n' nasty hair extensions. We were attaching all kinds of random things to our heads and passing them off as extensions. Give us that ferret there, I'll use him as a ponytail, no one will notice.

And we didn't really, we thought it was hot. Maybe because Paris Hilton told us so.

This picture is from 2003 while Scarlett was still mit mullet. I feel bad about this now but her hairdresser should feel so much worse. How could you do that to such a beautiful woman? Ah, trends, you are a cruel mistress.

And Jordan just abandoned all hope in 2002 and just threw everything at/on her head. 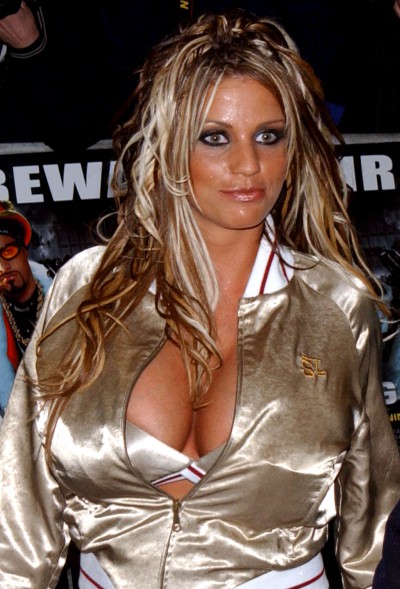 The noughties were not subtle. We did not strive to embrace natural beauty and to gently ampilfy our god-given best features a little. No, we if we could afford ridiculous looking hair, that was something we wanted everyone to see (I'm not judging, I was in peak self-ridicule-without-realising-it during these years).

And the All Saints gave good gaudy. Nicole was an early adopter of the stripe back in 2000. Here she is at the premiere of their movie 'Honest'.

And if you can remember the plot of that film, I'll send you a free Bump It. 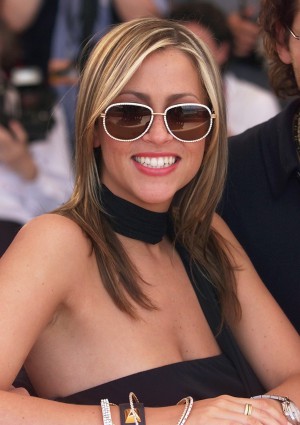 But Cheryl was giving her a run for her money (there's a movie plot hint there if you really want that Bump It) in 2003.

I can't look at this picture without the words 'mob' and 'wives' coming into my head. 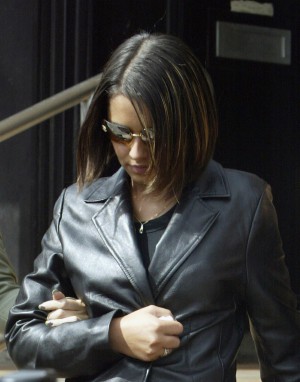 In 2006, Posh Spice cut her curled extensions and a new Victoria Beckham emerged from her WAG egg. 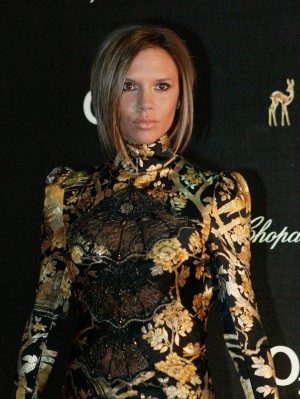 A quick straw poll of the office shows that our colleagues did not escape the Pob. And neither did the celebs.

Katie Holmes followed suit while I reckon Tom was still channelling the Posh pixie-with-grown-out-fringe of a few years earlier. 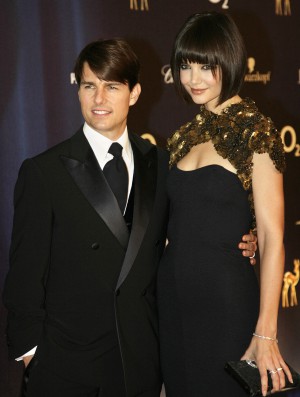 Katie ditched both as soon as the curse of the noughties was broken.

I could finish this article by telling you about the débacles that I hid under my very own fedora. But I'll only share mine if you'll share yours.

Shall we revisit our own hair disasters of the noughties? Or should we leave them rest where they belong, in the past? It's a dilemma worthy of a  Nelly and Kelly Rowland duet.

To the comments (I'll just wait here shaking my bon bon until you get here).