Angelica Nail Polish at Penneys is Cheap as Chips! 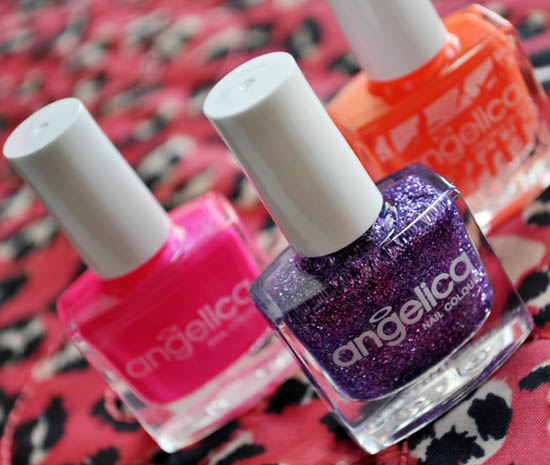 That turned out to be yesterday so I hit up the Angelica display in Penneys on O'Connell Street. I also bought a pink and black striped top which oh-so-clearly knocked off one from Zara from a couple of months ago, which Zara in turn had knocked off from Prada, and when I got it home and tried it on (I know, I know), I discovered that due to the extreme scabbiness of its cut, I couldn't get the sleeves past my forearms. Yes. MY FOREARMS. Not previously a body part I had ever worried about being too large, so thanks for that Penneys. 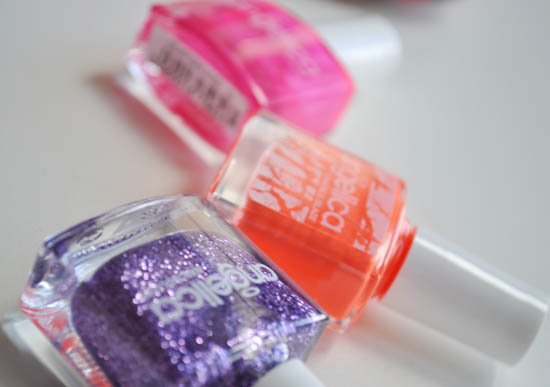 Anyway. Back to Angelica. At €2.75 these are a steal. But, y'know, are they shite with it?  Based on the three above, they're ok actually.  While there isn't a huge choice there's enough on offer to keep most nail nuts amused with cremes, shimmers, glitters and even cheapo crackles. 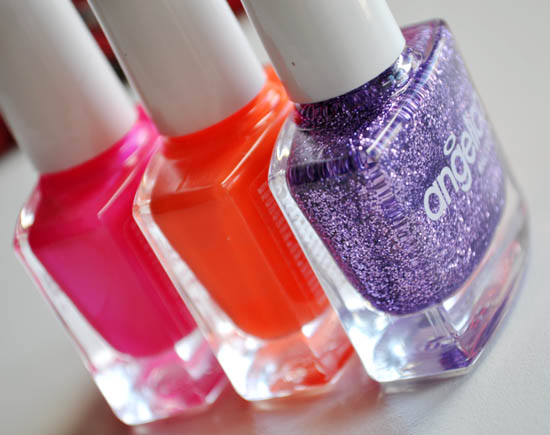 I bagged Heartbreaker (the pink), Neon Orange Crackle (yep, the orange!) and Goddess (the purple glitter). Heartbreaker I had thought was a creme but it's actually got a blue iridescent shimmer in there so it's a little bit like Orly's Flirty, for anyone looking for a cheap nearly-dupe. Opaque in two coats, I reckoned that was decent. Glitter though: would it look ace in the bottle and like water on my nails? Again, I was pleasantly surprised: three coats did a nice coverup on a bare nail, and of course over a matching shade you'd probably look presentable with one or two. 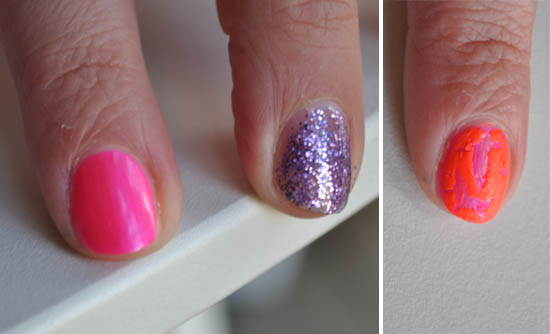 Here we go with Heartbreaker and Goddess, and to test the crackle polish, I laid it over Heartbreaker. It's definitely the weakest of the bunch and was quite gritty and lumpy but a good shake and a practice might solve that. Plus, for the price ... well, I won't be doing too much complaining, lets put it that way. Angelica crackles come in metallics too - oh yes they do. Gold and silver for €2.75? I think I'll be back.

I can't report on wear and tear yet - and in any case I'm a crap barometer having very weak nails - but again, I wouldn't be expecting a lot for the money. So, Angelica does indeed come up trumps in the budget spectrum I'd say - nice bright shades, a mix of finishes with good coverage and quick drying time plus some gimmicks you'll like in the crackles. All that for under €3 a bottle?  Get in (my basket).