Beaut.ie Awards Shortlist round OPEN! On your marks get set - vote! 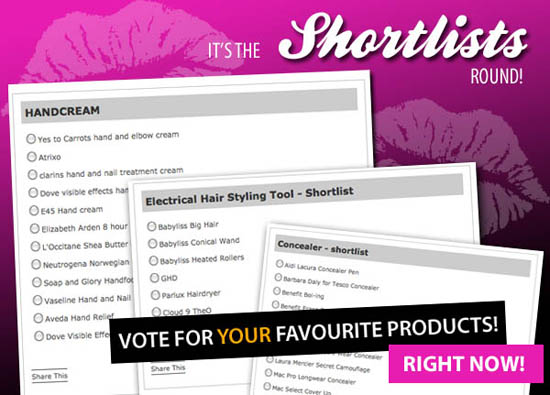 have resulted in these shortlists.  Phew! (*wipes brow with hanky, deals with caffeine withdrawal and unchains self from laptop*).  The lists represent the most popular products from the nominations in every category and everything from mascara to moisturiser has been rated and recommended.  We are really proud of these lists and everyone who voted in them.  They're totally brilliant and the products you voted for are the ones you really love - which makes these awards completely genuine and honest.

The shortlists vary in length.  One of the reasons for this is because some categories were so popular that they had more votes than others and rather than use a standard cut off for every category we've let the lists reflect your feelings.

And even if your own particular favourites didn't make the cut in a category or two that doesn't mean they're not good - it just means they didn't have enough critical mass to make it through.

So enjoy!  It's brilliant seeing what everyone rates and loves isn't it?

And now lets narrow the lists down to get a winner in every category - click here to get voting!  It doesn't matter at all if you didn't nominate - you can vote for your faves now.  And remember to send this to a friend - the more people that vote in this final round the more representative the winners will be!