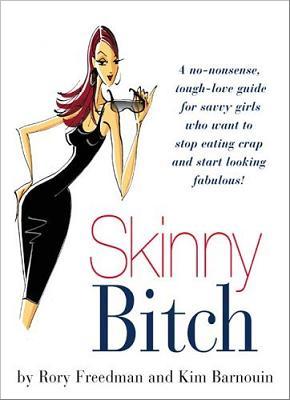 Posh Spice was recently spotted pouring over this book in an LA caff. God knows why - maybe she spotted some more hotpants she just HAD to squeeze into and thought this might be the way to go.

The authors describe themselves as your new smartmouthed girlfriends. They may be bitches the say, but they're skinny bitches. Whoo hoo, sure that's great for them isn't it?

And maybe it's just me, but I'm not really keen on that philosophy. What's so great about being a nasty skinny lollipop lady? The diet is basically a vegan one - very difficult to follow in the real world. The authors abhor meat, additives in food, cigarettes, alcohol and coffee. Give them all up or you'll never lose your fat ass.
There are a few gems in it though. Such as:

Say goodbye to soda and hello to sweet ass.

Cigarettes are for losers. They're so 1989 and so uncool.

Sales of the book rose by over 600% after the pap shot of Mrs Beckham leafing through it. Now she's the ultimate Skinny Bitch. But do we really want to be that thin?