Clearasil Ultra Rapid action treatment cream: actually does what it says on the tin 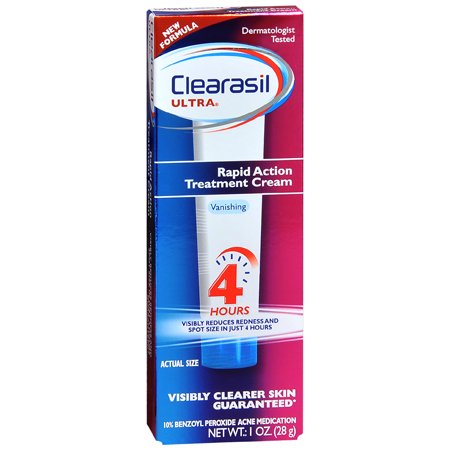 "So what attracted you to Clearasil Ultra Rapid Action treatment cream Aphrodite?"

"Well Terry, if I'm honest it would have to have been the big red 4 HOURS image on the front of the tube."

"Did you not think that would just have been clever packaging Aphrodite? After all you're long enough in this game to know that."

"Yes Terry - but when' you're spotty you're desperate and willing to grasp any promise of help."

Clearasil know how to get you at your most vulnerable. Normally their preparations are so harsh that they react with my skin like battery acid and burn a big hole in my chin. Yeah the spot may be gone - but so is most of the surrounding area. It's like bleeding Hiroshima - a mushroom cloud practically goes up when you apply it.

This cream seems to be different though. According to Clearasil new Acceladerm technology (another made up psuedoscientific term) works to sink deep down into pores and clear up spot size and redness fast - hence the four hours claim.

But does it? Well it definitely improved things for me. Better than the usual Clearasil spot creams, this is a handy one to have in the bathroom cabinet in case of emergencies.