Coming Round to Coastal Scents 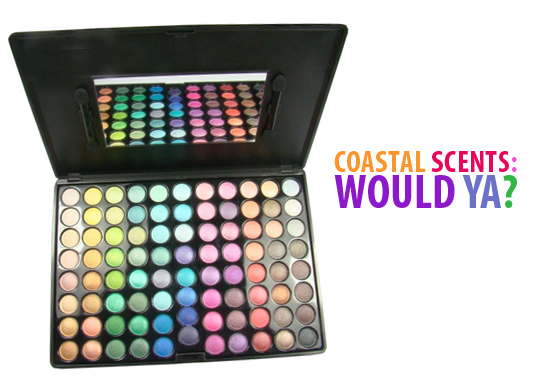 If you're a fan of US beauty blogs, you'll probably have come across Coastal Scents before. It's an on-line store that sells really cheap makeup. Cheap-looking, at that, which is why I've never seriously investigated it as a contender.

Particularly noted for their 88 piece eye palettes, in my experience, massive shadow collections that look like those bargain sets you get in Dunnes at Christmas never stand up to any sort of scrutiny: the payoff's crap, pigment is negligible and longevity isn't even a consideration.

Except for one thing: bloggers rave about this stuff. And I mean, rave. So I thought I'd look into it a little more, prompted by an email we got from reader Green of Eye, an Irish gal currently living in Canada. Forced to leave most of her products at home due to weight restrictions, she reluctantly ordered Coastal Scents' 88 piece shimmer palette and some brushes after reading convincing reviews on MakeupAlley.  "I usually stay well clear of things like this as I've discovered that it's mainly talc and very little pigment," she said, adding that, "their stuff is quite inexpensive. I ordered the shimmer rather than the matte palette and have found it brilliant." Wow - colour me surprised.

She's not the only one to have been impressed by the brand. Northern Irish blogger Arlene Johnston, the brains behind the Dressjunkie blog, was initially skeptical too. "When the site loaded and looked like something from the early 90s, words that sprung to mind (and still do) are cheap, tacky and basic," she says. What made her buy? Recommendations from YouTube-r EnKoreMakeup, plus the cheap exchange rate. "The rationale was that the prices were so reasonable even with shipping (this is 6+ months ago when the exchange rate wasn't quite so piss poor) that should the goods turn out to be rubbish I would only be down £20," she reasons.

Fair enough -  so how are the actual products?  The first purchase Arlene made was the the 28 Piece Eye Shadow Neutral Palette, of which she says "everyone should have this in their possession. The pay off is amazing, the pan sizes are comparable to a MAC shadow and there are more than a few MAC dupes in there too!" Quality-wise, Green of Eye agrees: "it's surprisingly close to Make Up For Ever or MAC for the price."

It's not just about shadow: the brushes get the thumbs up from both girls too. Arlene confirms that they sell "good quality brush dupes", and Green of Eye says of her White Angled Liner Brush that it's "the same as Benefit's angled brush and it set me back $2."

Of course, it's not all positive. With prices like $21.95 for an 88 piece shadow set, or $16.95 for a 10 Piece Professional Blush Palette, something's got to give - and that something is the packaging. It's very basic -  think clunky cheap black palettes. While Arlene's quick to point out what good customer service and quick shipping Coastal Scents offer, she's less keen on how the stuff looks. "Presentation can be poor - eyeshadow sample in a zip lock bag, anyone?"

All in all though, it looks like I may be forced to eat my words with regard to Coastal Scents. Have any of you tried the brand? And would you be interested in buying based on the above? Leave us a comment and let us know.