Gym Virgin Diaries: Week Four and the Rise of the (Weight) Machines

Our guest writer and gym virgin Simone is back with her fourth update. Today she tells us all about the gym machines that appear in her nightmares, how she knows that the programme is working and gives us an update on her stats!

As week four begins I’m starting to feel a real difference in my fitness levels. One of the toughest pieces of equipment in the gym (for me) is the ‘prowler’.  Even the name sounds scary! For those of you unfamiliar with this little beast here’s a pic.

The Prowler: My arch nemesis

Now I’ll grant you, it’s fairly innocuous looking.  In fact, when I first saw it I thought, ‘well this can’t be too hard’.

But boy was I wrong! In essence, you push it up and down a strip of astro-turf as fast as you can until your limbs fall off. If that's not great craic, I don't know what is. You can vary it by holding the high handles as in the above pic or the low handles that you’ll see at the apex of the V shape. And you can add weights to add to the fun.

The first day that Owen got me to do double prowler (up and back twice with no rest break) I couldn’t breathe afterwards, I thought my heart was going to burst out of my chest and I was pretty sure that I was going to throw up (thankfully for everyone involved, and the astro-tuf, I didn’t).

But this morning, the same exercise, while still very tough, was manageable. It was the first noticeable thing that I’ve been aware of, where I could say, yep, I am fitter than I was three weeks ago. 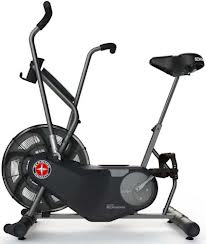 Another little Go Gym ‘gem’ is the Airdyne bike. Now, at first glance it just looks like another stationary bike. But in fact it’s the ultimate cardio workout.

The fan increases the resistance as you pedal and the pedals are actually further back than on an ordinary bike. And on top of that your arms are in motion as well as your feet, meaning that you’re going to work harder than you ever have before.

We tend to use it at the start of our workout to raise my heart rate rapidly before we hit the machines. Luckily Owen doesn’t have it on the plan every day and in this case I think that having a trainer there to push and motivate me makes all the difference as I couldn’t see myself lasting more than a minute on it if I was left to my own devices. He’s most certainly a taskmaster but a very fair one. 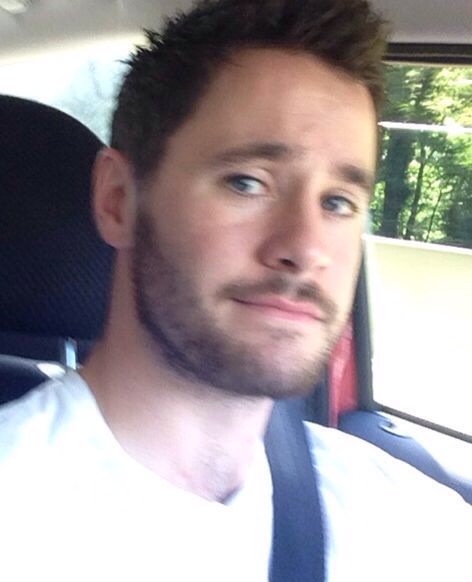 Trainer Owen : Not my arch nemesis

This week we’re looking at stepping up the training a little and going from three to four days. Yippee.

But on the other side, the food aspect is fine and I’ve felt the My Fitness Pal App has been a great help in letting me monitor my calorie intake in a very simple way. I’m still kicking off my mornings with my breakfast smoothie, and It's great post workout when I really need the potassium in the Vita Coco water to combat potential cramps. And they’ve evolved to include some bee pollen now as well (one of the more recent additions to the Super Foods list). But never mind the hype, it has genuine health benefits which you can google if you’d like to know more about.

And finally down to the numbers - it’s been another steady week of weight loss, 2.2lbs (1kg). But the measurements are telling a better story, with legs being down 5cm, and chest, waist and hips all came down by another 2cm each this week. There was no change again on the arms.

My trainer seems happy with my progress so I’ll just keep my head down and my heart rate up. 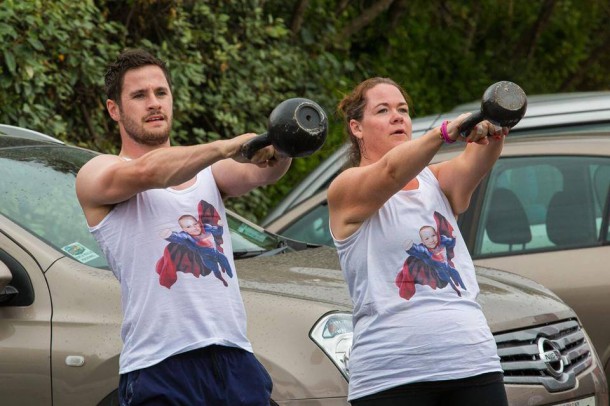 Own and the kettle bell challenge

And following on from some requests last week, you'll find the recipe for a healthy pizza (yes there is a god) at the bottom of this article. Now, you couldn’t be scoffing it every day, but its fine as an occasional treat. And it might just be perfect for the upcoming Bank Holiday weekend.

Can you identify with Simone's gym virgin diaries? What gym machine is your arch nemesis? And do you have any recipes that you'd like to share? To the comments! 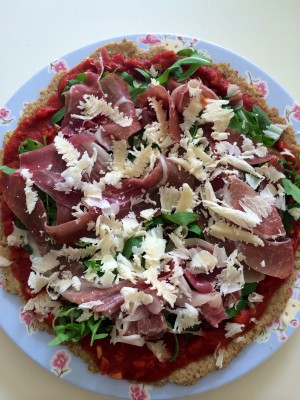 Tomato Sauce (simmer passata with garlic, a chopped chili, oregano & olive oil for 10-15mins on a low heat until thickened)

(or feel free to use whatever toppings you like)

Put a baking tray in to heat up.

Grate or blitz your cauliflower in the food processor until it’s in tiny pieces.

Then cover it and pop into the microwave for 4 mins.  Once done pour it out onto a clean and dry tea towel to cool down.

As it’s cooling you can grate your cheese and put it in a large mixing bowl.

Once the cauliflower is cool enough to handle, pull up the edges of your towel and wring all the moisture out of the rice, as hard as you can.

Add it to the bowl with the grated cheese, and tip in your oregano, garlic & egg.

Mix it all together.  Then lay a piece of grease-proof paper onto a chopping board and rub it with a bit of olive oil.

Shape your 'dough' into a pizza shape on the paper.

Then carefully remove your hot baking tray from the oven. Slide the paper and the base across onto the pan and put it back into the oven for about 10mins.

It’s done once it has a golden brown colour all over.

Spread your sauce and toppings over your base and then pop it back into the oven for about 5mins or until it's melted and the cheese is bubbling.

Add some torn basil to the top as a garnish.

Then leave it to cool for a good 5mins before tucking in!

We've got some bad news about bananas

Your easy guide to springing into the new season the healthy, happy way

We look at some bad skin habits to leave behind you as you embark on a new year!

Saving Face: One Woman's Must Haves for Tackling Sensitive Skin