Hairdresser Fear: The Longer I Leave it, The Worse it Gets 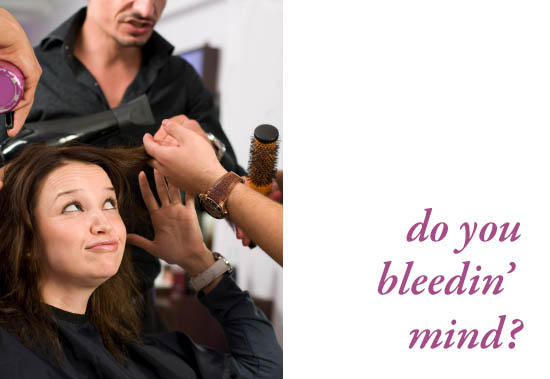 D'ya know the way when you (trans=me) haven't darkened the door of the hairdressers for oh, about a year (forgive me, Estee, I have sinned, and it is actually about 12 months since scissors last touched my locks) and the longer you leave it, the more of a trial going back becomes?

It's not the cut I'm apprehensive about. It's the lip-curling incredulity about the state of my split ends I'm completely weary of. Because I know - oh God I know - they'll give out yards to me.

Oh yeah. There'll be chiding, jaysising, brow-raising and all manner of "who cut it for you last" (ans=you) about the absolute state of my hair, what a terror I am for leaving it so long and unless I go really high-end (which I can't afford at the moment) this seems to be bog-standard salon behaviour, and no one bats an eyelid at the customers being shamed in public by the staff.

Ok, maybe it's just me. I do often leave it a long while between trims - basically because I don't care to pay to be given out to - and then I end up paying to be given out to. And my split ends are a frizzy disgrace that no amount of Moroccanoil can disguise any longer. So I guess I bleedin' deserve it after all. Gah!

What's the worst case of Salon Shame you've suffered? Spill in the comments!