Salon Hygiene: Why it Matters (Warning - Gross Pix Inside!) 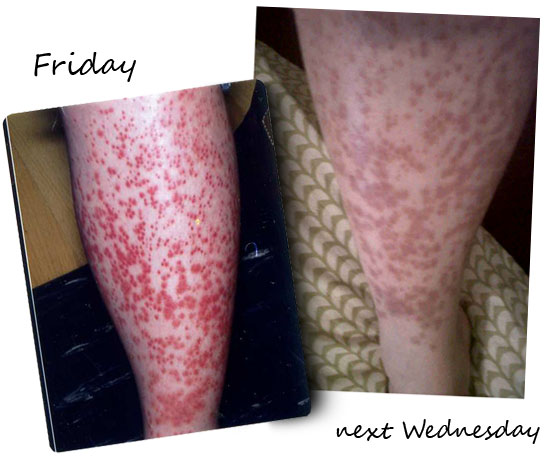 We've talked before about salon hygiene and the perils of double-dipping and yes, we think it's of huge importance. Salons should be maintaining basic standards as a matter of course - just as food businesses have to - but it doesn't always happen, unfortunately. And it's easy to let all that slide into the back of your mind when a particularly good beauty deal comes your way and cash is tight - sure you might ignore a grubby paint job, wax-spattered towels and overflowing bins for a good-value offer, eh?

So when Beaut.ie reader Pamela contacted us to tell us of the grim tale of what happened to her post salon-wax, we thought it was worth sharing. As the 2010 May bank holiday rolled around, Pamela headed at 9am to a beauticians she hadn't previously tried to get a leg, bikini and underarm wax. By 7pm, the swelling and heat from her legs had forced her to a local chemist where the pharmacist took the photo on the left, so shocked was she at the condition of Pamela's legs.

The next day, she went to see her doctor and two weeks after that, a dermatologist, who told her that the most likely cause of the problem was poor hygiene in the salon. Now, the same wax was used on Pamela's bikini line and underarms, and she had no problems there, so an allergy to the product was ruled out, and medication prescribed was anti-bacterial. The dermatologist also speculated that the therapist's technique could have been at fault.

Pamela was prescribed a cocktail of medication to help the problem: Orally, she took anti-histamines,  steroids and antibiotics;  topically she was applying steroid and antibacterial cream. In total she took or applied medication for a fortnight, and following that she moisturised to keep the skin moist and scar-free. It wasn't until last August - three months on - that she felt able to show her legs in public but even then she felt self-conscious as they were still marked. A year on, she says, "only I would really notice the marks that are on my lower legs - the colouring still isn't perfect."

So, how did the salon react? After handing over a combination of €93 for waxing and €248 in medical bills, Pamela was obviously out of pocket and wanted some recourse. At first, she met with resistance. "They said, 'what do you want us to do about it'," she told us, but a chat with the manager got a different response. Pamela's medical bills were covered and she was given a voucher from the salon to cover the cost of her waxing.

So how does she feel about beauty treatments now, and has the experience put her off going to salons? "Absolutely," she says. "I only get bikini waxing done now and I would get a manicure and a pedicure done. I would be very nervous to let anyone use any product on my skin. I used to love going to the salon and would have got facials and tans done before but since my experience, I wouldn't dream of it."

It's a shame - but it's also a salutory lesson to the rest of us who've been lucky in the past. If you're paying for salon services then you are entitled to a clean, sanitary experience. As mentioned, we've written about this before, so check these posts out for more information: