They have a terrible rep at the best of times and I blame Jaws primarily for this.  And er also the fact that sharks are vicious hunters who would chew the leg off you as soon as look at you.

But due to my addiction to nature programmes I know that they're highly intelligent animals and that we can't even begin to understand half of what goes on in their minds. 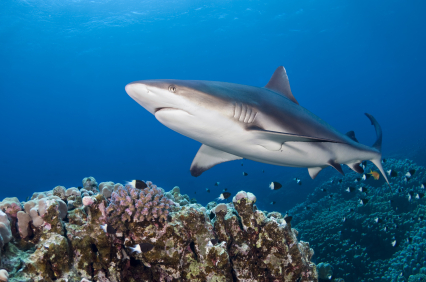 Which makes it all the more distressing to learn that they're being hunted to extinction in some areas, all in the name of beauty products.  Shark liver contains an ingredient named squalene - and the cosmetics industry loves squalene.  It's deeply moisturising, easily absorbed and leaves no greasy residue on the skin, which makes it absolutely perfect for moisturisers, lipglosses, suncreams and the like.

Cosmetic companies love it so much that sharks are overfished and in danger of extinction because of it.  A few years back there was an agreement across most major cosmetic companies to stop using shark squalene and to switch to sustainable vegetable alternatives - so the likes of Ponds, Dove, L’Oreal, Boots, Clarins, Sisley and La Mer and many more are all shark gut free.

Or are they?  A report by French NGO Bloom states that it's only in Europe that we're actually concerned about sharks and the rest of the world doesn't give a feck.  In Japan for example 90% of squalene comes from sharks.  And all of those companies above operate in Asia.  The report actually makes horrifying reading.   Around three million sharks are needed to meet the needs of the cosmetic industry every year.  When they're fished the liver is cut out and sometimes the fins cut off (for soup) and then the (usually still alive) animal is thrown back into the water.  They're not used for their meat, just their livers. 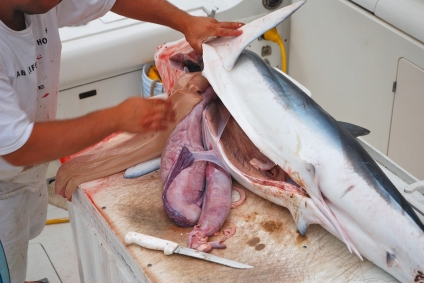 It's a cheap and profitable way to make a living and because of this cosmetic companies are are often misled (for misled read conned) and still unknowingly incorporate shark squalene into their products, thinking that it's the sustainable veggie kind.  It's much cheaper to produce shark slime than vegetable slime and so the temptation to kill sharks for their livers is high by squalene suppliers.

However a method to tell whether an ingedient is shark or vegetable squalane or squalene was developed a couple of years ago - but it seems the cosmetic industry isn't using it, because sharks are still being hunted to extinction.

How would you feel if you thought you were using shark squalene in your lipgloss?  Or in your expensive serum?  Because chances are you still might be.