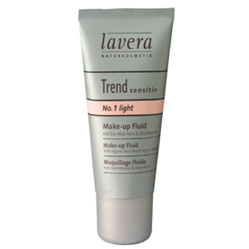 I recently got a sample of a foundation from Lavera's Trend Sensitive range. I tried the Sensitive Make Up Fluid in Light, which happily suited my skin tone. It's light by name and light by nature - it's a very liquid foundation that gives a fairly sheer amount of coverage. It is possible to work up more coverage though and the fluid blends easily.

I was initially a bit non-plussed by it due to the the liquidity of the formulation and the sheerness, because I generally like a good bit of coverage. But then it got me thinking - being the lazy cow I am, I don't generally bother with foundation during the day and it's never good to look overly made up in natural light. So actually, this would be a great foundation for day wear. If you want a bit more coverage, they've got that sorted too - you could try their Trend Sensitive Make Up Fluid in Natural, which they say will cover small blemishes and skin irregularities.

Plus, like all Lavera products, their foundation is organic and vegan, and formulated to be kind to sensitive skins. So if those things are a concern for you, give it a whirl - it's also very reasonably priced - â‚¬13.92 from healthfood shops and you can also buy on-line from evenone.