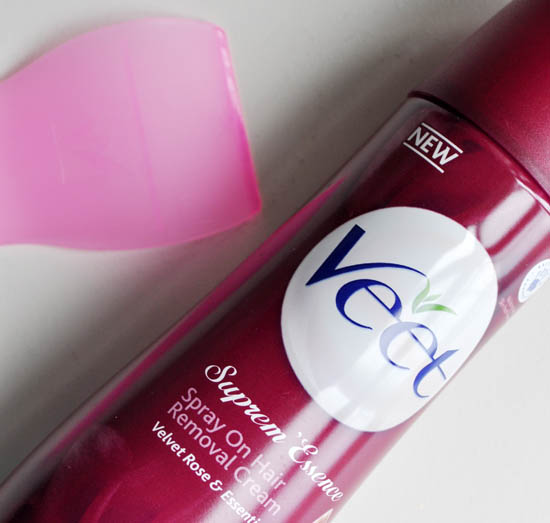 Recently himself returned from collecting my post shaking his head. "They were looking at me awfully funny," he said, as he put the sack down (yes, sack, the beauty editor gig and the blog generates a lot of samples), adding "oh and by the way, there's a box in there, it's burst on one side, and it weighs a bloody ton."

I was in the middle of something and didn't have time to check out the contents, but later on unpacked the postbag and discovered the source of the Amused Sorting Officer Worker in the Afternoon. For inside was indeed a burst box, and spilling out of it was a motley selection from a PR firm in the UK whose clients number Veet, Clearsil and Durex. Lube, zit cream and hair remover smiled up at me as I dug through the bag and the pair of us creased ourselves laughing at what on earth they must have thought in the post office.

Anyway, the upshot is that himself is refusing to ever go back and collect parcels for me and I tried Veet again for the first time in four years.

If you're a long-term reader, you'll know we're not fans. I mean, realllly not fans. Hair removal cream is messy, it stinks, burns and doesn't even do that good a job. The last time I Veeted my legs was immediately before a long-haul flight in 2007 and I gave myself chemical burns. Which I then had to suffer mid-air for 12 hours. Not pleasant.

But having been extremely lazy in the depilation department of late (oh it's only hair!) I hadn't shaved my legs in a couple of months and so they were good candidates for sending off to a hairdressing school for all sorts of teaching and learning, meaning that shaving them was going to be a job I was really not looking forward to.

You use this in-shower and you do have to - while it's better than the creams of old because it's a spray (duh) it will go everywhere and you need the protective shield of the bath to limit mess. So, it's dead simple: spritz a fairly thin layer evenly on legs and then tootle about on the rim of the bath for between three and six minutes (depending on the thickness of hair, of course I needed six minutes) before sluicing and spatulaing off with the included rubber paddle.

There's a kind of sick satisfaction in watching your excessively long leg hair liquidise and wash away down the drain, I have to say.

So, how is this better than Veet of old? Nicer smell, for a start. Less likely to make your corneas detach with the bang of nasty chemicals. It actually did genuinely remove most leg hair (I did ankle to knee) in six minutes and I was just left with a few sticky-outy bits which the paddle either took care of or some I had to take a razor to. But best of all - no burns. I used to always sear myself to the bone with this stuff, and I was always good about sticking to the time, so there was no reason for it. So, clearly it's kinder and better formulated now.

It's still messy, it's not a perfect product and you have to clean the bath after using it, plus I don't know how cost-effective it really is (I've no euro pricing on this so will update asap!) because I don't think you'd get more than three goes out of each can. But that said, this particular one isn't a bad bet for a quick fix for a she-gorilla who needs some urgent deforestation.  Have you tried it?