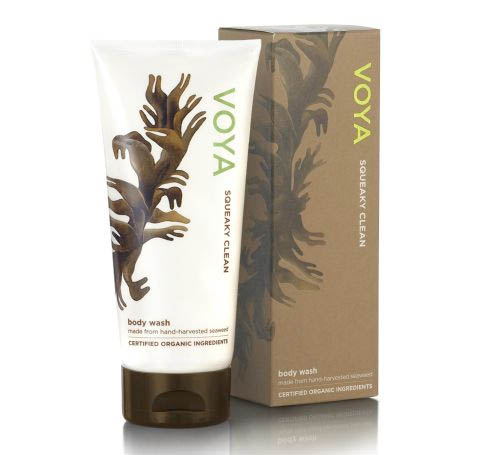 We share a lot, myself and himself. A couch, TV rights and the remote control, but rarely shower gel. My product of choice is posh and expensive; his is any auld shite from the supermarket, and when he ran out recently I was most put out to have to donate a recently-arrived tube of Voya's Squeaky Clean body wash, €16, to the cause. Pricey, yes, but it's Irish, organic and a nice brand, not to mention a bit of a treat.

This is lovely stuff. It's got a silky texture, it's SLS-free so non-drying and it's packed full of goodies like organic seaweed harvested off the west coast as well as lots of oils and vitamin E. Nicely conditioning, so. It also smells amazing: sort of gingery - though I don't think there is any actual ginger in the mix - plus there are essential oils of lemon peel, lime, mandarin and patchouli. The result is a fragrance that's as acceptable to my nose as it is to a man's. After all, we've all been warned by that Old Spice ad, haven't we?

"So, what did you think of that Voya stuff then?," I asked. "What?," he said, all confused. "It's just shower gel isn't it?" Me: "no! It is not just shower gel! It's much nicer! It's organic, packed full of lovely ingredients! It's sulphate-free so it'll leave your skin feeling nice and not dry," I raphsodised. "Eh right," he said, going back to killing aliens loudly, or whatever it is he does on that xBox360 of his. I persisted. So, did you think it was nice, like? "Yeah." "And did you think it had a nice scent?," I queried. "Yeah," he responded. "So, you liked it then?," I asked, giving up. "Yeah," he confirmed.

There you have it so. A firm thumbs up from the man in my life.