Here’s a scenario for you - you’re out in a nightclub with friends, dancing, minding your own business. Suddenly, you feel a hand squeezing your bum. What do you do? Shrug, sigh, walk away? Or turn around and give him a right telling off?

We’ve all been through it. We don’t particularly like it. Why then do we so often not do anything about it?

About a year ago, I wrote a post on my personal blog, giving off about what I thought was an extremely offensive Facebook advertisement for the Dublin nightclub Alchemy (you can read the post here if you’d like). I didn’t think anyone would listen, but thanks to a ton of like-minded folk who shared it on Facebook and Twitter it got over 4,000 views in one day and got picked up by Jezebel. 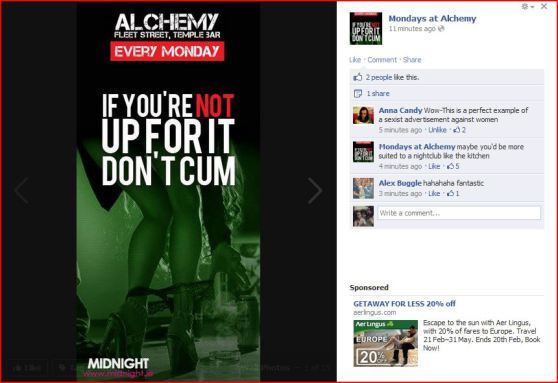 In my post, I brought up how frustrating it already was to be groped in a nightclub, without the nightclub condoning it through their advertising. I was surprised by how many of my friends said: “I’ve never thought about it like that.” In truth, I had never thought about it like that. Until that moment, getting groped in a nightclub was just something else, alongside sore feet and streaky fake tan, that girls had to put up with on a night out. A nightclub is the only place in which it is socially acceptable to inappropriately touch someone and get away with it.

It may seem completely redundant for me to say getting groped in nightclubs is not on, but to be quite honest, you wouldn’t think it from talking to some young women. We’ve been taught to treat gropers kind of like how you would scold a small child acting the maggot in Mass - “Stop that now. That’s not nice.” “Don’t mind them. It’s just what they do.” But you have to ask yourself: what makes some (not all) guys think that randomly reaching out and grabbing a female body part is a sure-fire way of snaring a bird for the night?

Sometimes you just have to laugh at the desperation of some young fellas - once in Coppers (where else?) a young, ahem, “gentleman” told me I had nice eyelashes. Intrigued, I asked him what he could possibly mean. He told me to close my eyes so he could get a better look at them. You can guess what happened next. Admittedly, I was stupid to fall for it, but you can’t fault him for trying something other than an arse-grope.

I’m still figuring out how to deal with handsy lads - a box in the face seems too over the top, yet a stern telling off often falls on drunkenly deaf ears, who often can’t hear you over the sound of the latest generic chart hit anyway.

How do you deal with someone copping a sneaky feel on the dancefloor?