Dean can't watch The Late Late Show back yet

He was the hero of last Friday's Late Late Valentine's Special, and we doubt anyone will be forgetting Dean from Coolock anytime soon. Despite a rowdy audience, a kiss-cam, and literally a johnny for everyone in the audience, it was young Dean who stole the show.

He was one of the contestants in the 'Blind Date' section of this Valentine's Special, and to everyone's surprise, the one Amanda from Kerry chose to go on a date with. The pair returned later on in the show with Dean proclaiming that he loved her, and they were going to make a go of it, although Amanda, fair play to her, was a good sport about it. 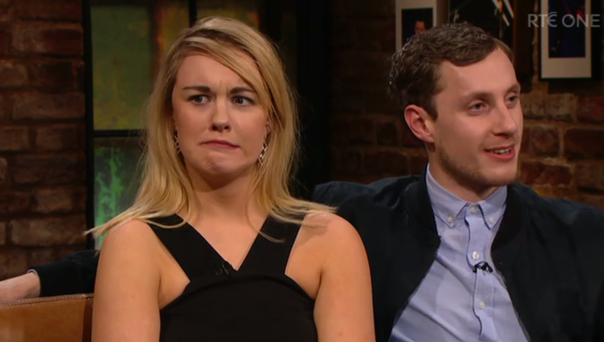 Dean certainly didn't hold back and in general was just a bit of a legend, proclaiming to Ryan he was feeling 'exotic' leading to a flood of memes over the weekend.

He joined Breakfast Republic on 2fm this morning for a chat, telling Jennifer, Bernard and Keith that he woke up on Saturday morning to a hopping phone, and most likely The Fear of the highest order.

He said he has so far found it too cringe to watch back, but his parents are thrilled with him, although he does regret dropping the f-bomb.

While it doesn't look like it's going anywhere with Amanda, he did text her yesterday to say he was sorry if he made a show of her, and Breakfast Republic are now determined to find Dean a girl.

So if you ladies out there play your cards out, you might just be Mrs Deano one day.

Have a listen to the full interview below, while you can watch his interview on The Late Late Show back here.