How To Turn A Woman Into A Fembot: The Power Of Photoshop Shows Us How It's Done

Every so often, an ad campaign or a magazine cover comes along with a big celebrity as the model, which is grand, only sometimes you’re left staring at the picture wondering who the hell it is, as the star in question has been Photoshopped beyond recognition. It kinda seems to defeat the purpose of getting the big name person involved in the first place, if you can’t even tell that it’s actually them.

A video has been doing the rounds over the last few days that sheds some light on the amount of work that is often put into photos after the actual shoot, in this case morphing a perfectly well-proportioned and pretty damn cute model into a bobble-headed, doe-eyed doll.

I quite liked watching the early transformation that the model goes through when it’s just well applied make-up and crafty lighting doing the job, but it’s impossible not to shout “AH HERE!” when it gets to the point that the photoshopper in question is giving the model giant anime-style eyes. Or when her legs are stretched or her neck is slimmed to the point that she doesn’t look like she’d be able to hold her head up or stand up properly without toppling over in a tangle of shiny Barbie doll limbs.

The video is actually titled “the Power of Photoshop”, so in this particular case I think it’s more about showing what someone who knows their way around the software can do with an image, rather than this being an ad where the client demanded that the gorgeous model be turned into a ridiculous fembot. But it still illustrates the kind of crazy and completely unachievable beauty ideals that are out there. 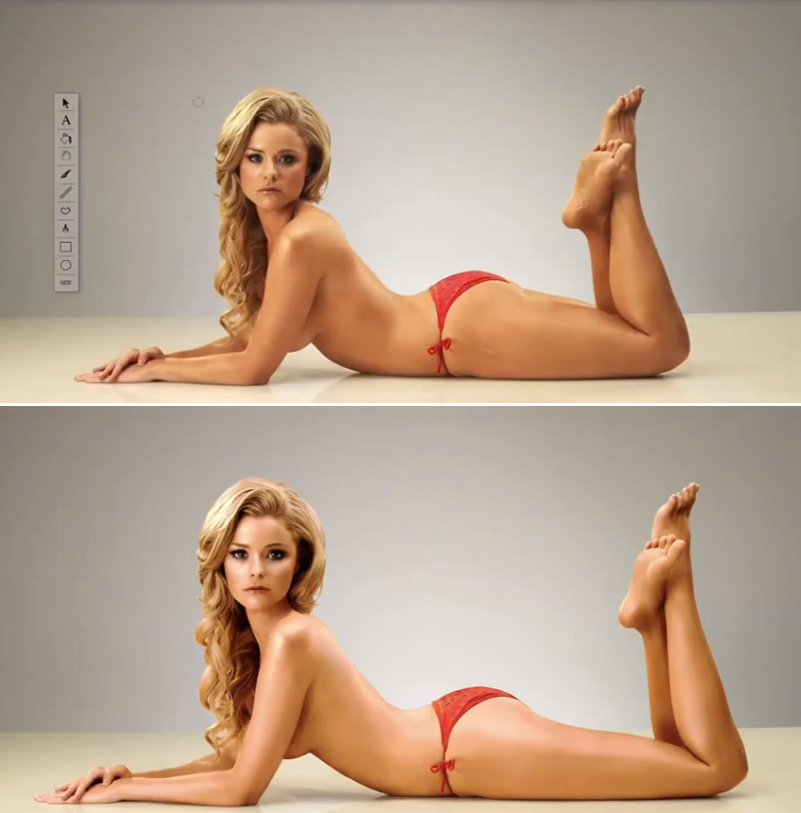 Spot the difference. (Hint: it's everything.)

I have to admit, the artist who worked on the image has some pretty mad Photoshop skills, but really could have benefitted from Tina Fey’s approach to airbrushing:

It’s okay to make a photo look as if you were caught on your best day in the best light.

Which makes a lot of sense to me, particularly in the case of companies forking out for big name stars and then airbrushing then to the point that you have no idea who it is that’s trying to sell mascara to you.

What do you think of this video? Are you completely sick of airbrushing, or think there's a time and place for it?

And does anyone else wonder if it's going to get to the point where companies are just going to create digital women out of thin air, rather than using actual humans?