Is Sex and the City the Movie Just as Good the Second Time Round?

It’s 15 years since the show first aired in 1999. Sex and the City was iconic to an entire generation (and beyond) of women, inspiring questions about life, love, sex, the status of women and, above all, how Carrie got a writing job, let alone one that pays well enough to afford constant trips to Chanel, Prada, and Manolo Blahnik? (I mean, all she does is pose questions – “It made me wonder, are we freaks?” “I had to wonder, are we romance intolerant?” The text version of her columns must be one long shambolic musing with no answers or solutions whatsoever.)

The film came on the aul’ telly box there at the weekend, and of course I settled in ready to enjoy it’s fun and froth. But I couldn’t. For it was AWFUL. Much, much worse than I remembered.

We open to a completely over-scored version of the television series, where everything – from Carrie walking towards Mr Big, to Charlotte and Anthony clasping hands in eager anticipation of Carrie’s vintage wedding suit, to Miranda revealing her un-waxed bikini line – is accompanied by an irksome ‘Bee bop boop, *strumming harp*, bee bop boop beep’ joke of a score. 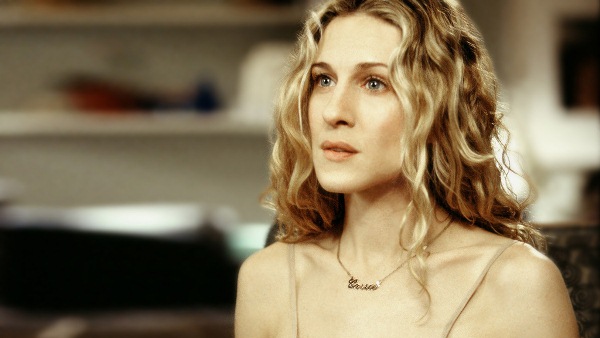 This dreadful music helps to tell us that Carrie and Big are supremely happy and remain completely in love. Charlotte and Harry are also supremely happy and remain completely in love. Samantha is in LA doing PR and agent-y stuff for Smith (who did not age well – can we just agree on this one point if nothing else?) while they lie about wearing ridiculous matching sequinned onesies in front of their LA fireplace. Miranda is still a red-head, and still a lawyer, and still living in Brooklyn.

There are many, many things that are infuriating about this film. And here is my pick of the worst of the worst:

Carrie is faced with the extremely tough choice of either selling the Manhattan apartment that she owns in order to contribute to the purchase of a penthouse apartment on Fifth avenue, OR having said penthouse apartment bought for her by her manfriend, the wealthy Mr Big who’s in finance-or-something–nondescript-and-never-explained-like-that. Because life is so hard, guys!! I should add that the apartment is referred to as ‘heaven on fifth’ throughout. Just. Gag.

Every time Samantha arrives in from California (wearing acid yellow, or acid green, or something with sequins and feathers and no bra) the women squeal and dance a jig and make a fuss. Which is lovely of course, except that it happens maybe every five minutes. She’s home barely a wet weekend and she’s back in New York again. Though who wouldn’t travel for the confetti and champagne that’s popped for her arrival every bloody time, in fairness to her?

Charlotte seemingly has no purpose except to be ridiculous, and blissfully happy at intervals. She now squeals things like ‘Get some sleep, groomie!’, and only eats American-made chocolate pudding in a five-star Mexican hotel. Unlike the cultured Charlotte we’re familiar with, you might think. In a single moment of actual character development for poor Charlotte, we hear that she stopped running in fear of it harming her pregnancy, bringing back memories of one of the best and most poignant episodes from the series.

But don’t worry, guys: Carrie fixes Charlotte despite having no medical knowledge whatsoever, and then it’s just over, and never mentioned again for the rest of this two-hour romp.

A $50,000 diamond ring is considered an appropriate treat, but a boyfriend buying you such a trinket is HERESY. Related, Samantha chooses to become his PR agent and move to California, but Smith’s a complete jerk to let her. Because, logic. It is therefore ultimately his fault that she spends all her time as a creepsville, shady, pervy, peeping Tom, or screeching into her phone, and wearing aforementioned eye-sores. 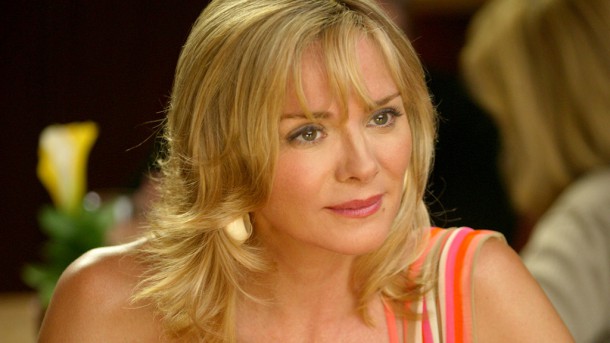 These are all minor points (and I could go on – the Saint Louise nonsensical punning and references to her ‘renting’ designer labels throughout gets on my last nerve! Not least because why does Carrie need an assistant? We never see her work?!) but there are more insidious problems with the film.

It is strongly implied that by working and being a mother, Miranda’s marriage is doomed without heaps extra effort on her part. Charlotte doesn’t work outside the home, and Carrie and Samantha have jobs but don’t have children. Their partners remain faithful (if afraid to get out of a vehicle and up to an altar, though that’s another story). But Miranda, has a full-time, full-on job, and doesn’t have time to wax her lady garden, so of course her marriage has trouble.

Similarly, while it is alright for Carrie to wail and bemoan her getting jilted and such while cutting off all contact with her partner of ten years, Miranda is considered harshly unforgiving for her attitude towards Steve post-infidelity. The implication here seems to be that it’s ok to cheat on your wife, because marriage is long and hard. It is not ok to get cold feet before attending and starring in a wedding-slash-circus, complete with bird-veil-combo. And then it’s Miranda’s fault that Big doesn’t commit?

There’s complete shock at Samantha’s “gut”, because she has been eating her feelings in LA. The so-called friends exchange horrified, wide-eyed looks at the flesh peeping out of her tight clothing, and then ask sensitive things like “How could you NOT notice?” Because for reals, how could a fifty-year-old woman not notice that she has become so huge and foul and disgusting that she can’t pull off a crop top and leather trousers anymore? If these body-obsessed harpies are friends, who needs enemies?

For me the experience was just such a let-down. I had never really analysed the film’s content previously, and I loved many aspects of the show. But the more I think about it, the more I’m annoyed by these elements, and the more I’m re-thinking my enjoyment of the show.

What do you think, I am being too hard on the film? Have you seen it or will you re-watch? Or do you think I’ve been ‘carried away’ like the film’s strapline suggests? Tell us in the comments!