Let's Twerk It Out: Miley Cyrus Performance At VMAs 2013 Raises MANY Issues

If there's one thing more important than the crisis in Syria, than surely it's Miley Cyrus's performance at MTV's VMAs. At least, that's what you'd think if you looked at some of the papers and big news websites this week, which made Miley's performance headline news.

If you haven't seen it, it involves the artist formerly known as Hannah Montana (and daughter of achy-breaky Billy Ray) strutting about in a sort of teddy-bear themed leotard before removing it to reveal what must be the sweatiest, most uncomfortable flesh-coloured bra and knicker set ever, seeing as they appear to be made of latex (I hope she lined them with a lot of talc). 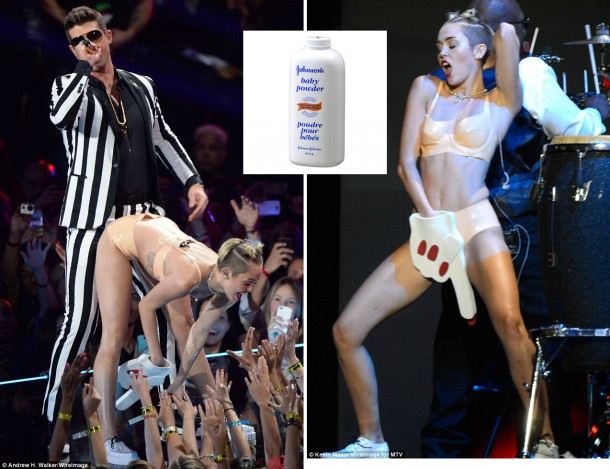 Over the course of the performance, Miley twerked with vigour, surrounded by a group of black female dancers. At one stage, a curvaceous black woman wearing a giant teddy bear head did some booty shaking while Miley pretended to bite her arse. And then she was joined by Robin Thicke, dressed like a sort of sex-pest Beetlejuice in a black and white suit and a chain medallion, to perform his extremely catchy but lyrically dodgy-as-hell hit 'Blurred Lines'. Cue mass outrage/glee.

I could do with less of the constant tongue-sticking-out but that's mostly because it's incredibly irritating and I keep thinking she must just get spit all over her face. Yes, it depresses me that it's basically compulsory for young female stars to take their clothes off, but that's part of a bigger picture and isn't just Cyrus's fault.  I do, however, have a problem with performing that creepy date-rapey song with Robin Thicke, who basically comes across in public as the human embodiment of sleaze and creepy objectification. 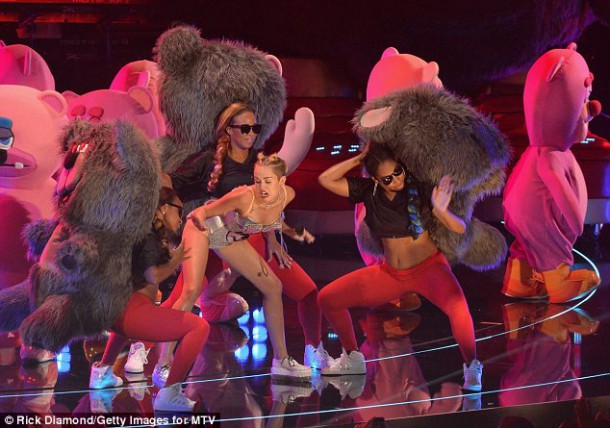 But the most powerful criticisms of Miley's antics have come from people who have a (totally justified) problem with the way she uses elements of African-American working class culture - and treats black women in her show. As Tressie McMillan Cottom wrote this week, there's a long history of black women's bodies being treated as overly sexual or comic in American culture, particularly heavier women's bodies, and Miley's performance is part of that.

Cyrus did not just have black women gyrating behind her. She had particularly rotund black women. She gleefully slaps the ass of one dancer like she intends to eat it on a cracker. She is playing a type of black female body as a joke to challenge her audience’s perceptions of herself  while leaving their perceptions of black women’s bodies firmly intact.  It’s a dance between performing sexual freedom and maintaining a hierarchy of female bodies from which white women benefit materially...

The whole point is that those round black female bodies are hyper-visible en masse but individually invisible to white men who were, I suspect, Cyrus’ intended audience. No, it’s not Syria but it is still worth commenting upon when in the pop culture circus the white woman is the ringleader and the women who look like you are the dancing elephants.

So what did you think of the Cyrus show? Is it just typically outrageous pop nonsense? Is it another aspect of over-sexualised pop culture? Was it racist? And what the hell is up with Robin Thicke (whose dad wrote the theme tune for Diff'rent Strokes, by the way)?