There are loads of sexist ads out there. In fact, some ads are so sexist you might even end up boycotting the product forever (bye bye, Club Orange!). But even the most creepy, patronising and downright sleazy ads of today pale in comparison to ads of yore, as this collection shows.

Yes, while these days there are plenty of ads that portray women in a really sleazy way (*cough* Club Orange* cough*) or ads that show women in an old fashioned and patronising way, at least it's no longer normal to have ads that actually say "Men are better than women!" 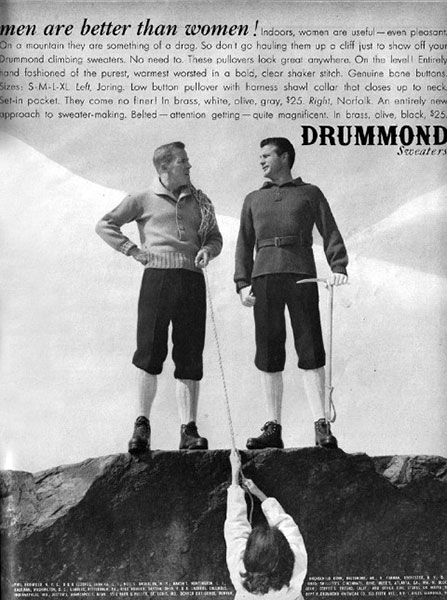 And then go on to say that if you want to show off your, um, "climbing sweater" you don't have to take one of those boring old "drags" up a mountain.

But being dropped off a mountain wasn't the only bad thing that could happen to a lady in olden day ad land. No, you could also end up as a sort of freakish human-headed animal skin with a man standing on your head, purely because you're so dazzled by his Mr Leggs slacks (yum yum) you'd literally "let him walk all over here."

You could also end up bowing to your husband while you give him some tea while he inexplicably lies in bed wearing a snazzy tie (the ties "tell her it's a man's world…and make her so happy it is". Really? REALLY?!)

Or, even more disturbingly, you could end up getting spanked by your husband for making the wrong coffee.

Or you could have a colleague wonder "is it always illegal to kill a woman?" because you didn't want to use a fancy new franking machine. Ah, the good old days!

Obviously these days we wouldn't see an ad that basically shows a man walloping a woman. But there are plenty of ads that manage to annoy these days. So what contemporary ones get your goat? And I know it's a tough competition, but which of the older ads do you think is the most outrageous? Do you have any others to add to the list?