Stop the Lights - Jamie Dornan's Gonna Be On Celeb Gogglebox

Be still our beating hearts, but the one and only Jamie Dornan is set to appear on Gogglebox this Friday night. He watches TV, just like us! Imagine.

The Fifty Shades of Grey star will appear on a special celebrity edition of the show as part of Channel 4's Stand Up to Cancer night this Friday. He will be joined by fellow celebs Nick Frost and Lee Mack, while Miranda Hart, Boy George and Geri Halliwell will also by cosying up on their respective couches to give their views on the week's TV.

Last year's Stand Up to Cancer night on Channel 4 saw the likes of Kate Moss, Noel Gallagher and Naomi Campbell turning up on Gogglebox and the whole night managed to raise £14 million for Cancer Research UK.

This year it will kick off with The Last Leg special at 8pm, followed by Celebrity Gogglebox, a Celebrity First Dates featuring Alexandra Burke and Anthea Turner, while Alan Carr's Chatty Man will also be taking part.

And Jamie Dornan will be there.

Did we mention that? 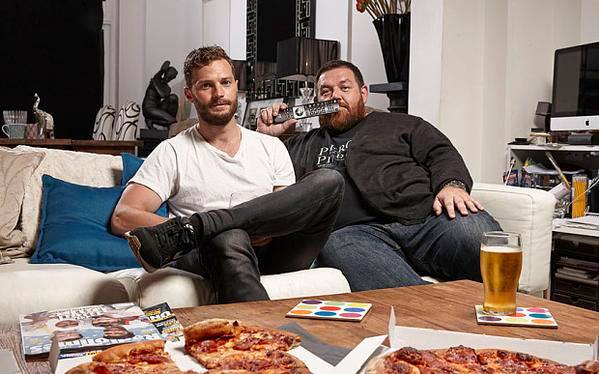 So are you going to tune in. Give us a good reason why not to.