Not that you'd know it from all those cans of Diet Coke, but as a household we're actually on a bit of a healthy eating kick at the moment. There's a fruit bowl on the table and vegetables in the freezer and salad-y things in the fridge and everything.

The other thing that's in the fridge is a jugful of what looks – and smells – a lot like liquified cut grass.

It's actually a green smoothie based on a recipe by clinical nutritionist and author of The Beauty Detox books, Kimberley Snyder, and it's supposed to be the smoothie equivalent of the second coming of Christ. According to Snyder, whose celeb cheerleaders include Drew Barrymore and Olivia Wilde, her fruit and leafy veg packed Glowing Green Smoothie provides optimum delivery of the raw nutrients that can help rejuvenate the skin, fight the signs of aging, and increase energy levels.

Well. Obviously I had to make some immediately!

That was the easy part. I just followed this here recipe.

Now, I only used two sticks of celery because I'm really not a fan. Then once the whole lot was blenderized and I tasted it and nearly puked because the celery flavour was so strong, I added an extra banana.

When I was done, it ended up tasting not too bad. And by that I really mean that it was not as completely and utterly stomach-heavingly revolting as you would think a mush of mostly lettuce and spinach would taste. It's no Zumo Berry or Mango Tango, I'll tell you that much, but after the first couple of tentative sips it was actually very tolerable. Grand, even.

And to be fair, it does look totally delicious. Not at all like something that even the Hulk would refuse to drink on the grounds that it was too green. 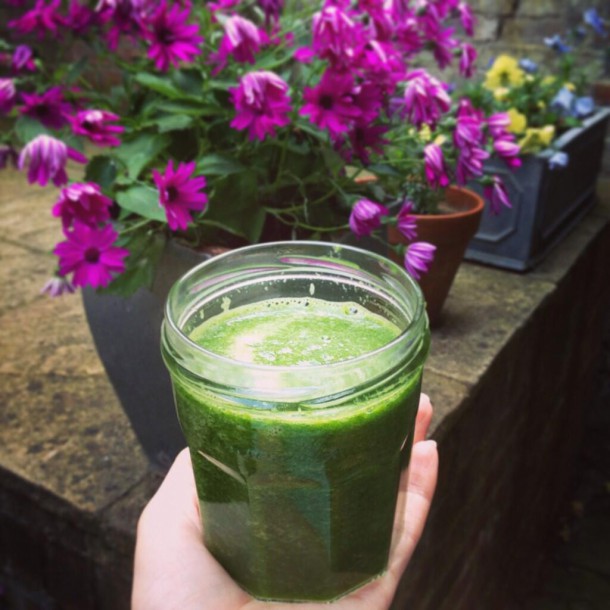 Unfortunately I've yet to notice any of the promised benefits of the damn stuff.

Still, the Glowing Green Smoothie seems like a good way to get a rake of servings of fruit and veg that I usually wouldn't so I'll stick with it for now – and let you know if my skin starts to look all sorts of amazing as a result.

I'd love to know if you've tried the Glowing Green Smoothie and if it did anything for you!

Why Juicing Really Grinds My Gears

Not always as healthy as they seem

Fifteen Things You're Guaranteed to Hear In Work This January

Bingo sheets at the ready

Our Review of Alchemy Juice Co. at BT2

Will it help or hinder your promise of a New Year’s health kick?

Top Tips from Kimberly Snyder, Celebrity Nutritionist. And Would You Spend €780 on a Blender?

Diet Diaries: Crossing the Finish Line of the Vegan Challenge. But What Do the Scales Say and What Have We Learnt?