Who's that Girl? Meet Ariane - The Overexposed Stock Photo Model

If there’s one thing I enjoy, it’s ridiculous stock photo cliches, such as People Holding Tiny Houses. (How and why is that a thing?) Or the time when someone noticed that there were hundreds of stock images showing women laughing alone with salad, making us wonder just what was so hilarious about some leaves in a bowl.

However, a different recurring theme in stock photos was brought to my attention recently and now I’m obsessed with it. Or her, to be exact.

She can be found happily cooking in a kitchen in an ad for saucepans, smiling radiantly while shilling for Simple, beaming at you from a Visa ad or worriedly looking through her wallet in an online article about being broke. Her name is Ariane and she is EVERYWHERE. Brochures, news sites, Facebook ads, you name it, Ariane has flogged it.

There are Facebook pages and Tumblr blogs dedicated to sightings of Ariane and her huge smile, with submissions sent in from all over the world. She’s particularly popular in Asia, especially Singapore as her Eurasian features clearly appeal to a huge amount of advertisers in the region.

There was an article written about her in the Filipino edition of Esquire, which managed to track her down and revealed that she’s a Canadian model who has made a business out of producing stock photos with a photographer friend, knocking out a staggering 200 images a month. No wonder she’s all over the place. When I Googled "Women Laughing Alone With Salad" for the linked article above, guess who was one of the first results?

Ah it's yourself. Of course.

On Monday night, after coming out of Cineworld on Parnell Street, a few of us were discussing how bad the film we’d just seen was (White House Down – I thought it would be the fun kind of terrible. It wasn’t.), when suddenly I noticed a familiar face several feet high smiling down on the street below. Feckin’ Ariane! I was so delighted to have spotted her it actually made up for the two and half hours of shite I had just seen. 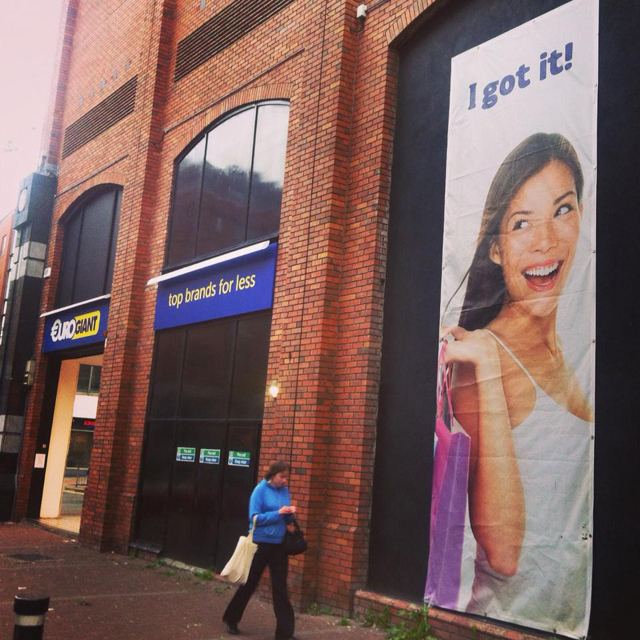 I’m now constantly on the lookout for her and her big smiley head and get a giggle every time that Facebook pages like Ariane – The Overexposed Stock Image Model post a photo of yet another sighting. She’s a dentist! She’s shopping! She’s working out and delighted with herself!

So, will you be keeping an eye out for Ariane now too?