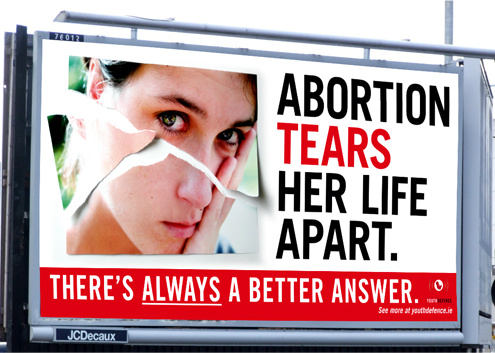 Those wonderfully tolerant and understanding people known as Youth Defence have been busy little bees of late. Did I say tolerant and understanding? I meant fanatical and bigoted. The billboard spaces of Dublin city have been playing host to their latest campaign, the sensitively sloganed "Abortion tears her life apart" ads, with a picture of a foetus or a crying girl on them. If you haven't spotted them yet,
it's only a matter of time, as unfortunately their campaign is soon to be seen on public transport and rolled out nationwide, like a big sinister cloud of misinformation and emotional blackmail.

There are episodes of Reeling in the Years that I find myself getting exasperated with. The ones covering the early Nineties that show the referendum on divorce and Seventies ones showing women defiantly crossing the border to buy condoms, while a priest faints at the sight of these scandalous hussies, taking control over their own damn bodies. The priest may have been out of shot, actually. Those are the ones where I find myself wondering how it could have taken so long for this country to cop on to itself and stop being so bloody backward. And yet I know the day will come when I'll be watching the episode summarising 2012 and wondering how the hell abortion and same sex marriage still weren't properly legislated for by then.

But as much as I'd like to dwell in this fancy futuristic version of our country, where women in Ireland have the basic human right to decide what's best for our own bodies and minds and where a couple can get married, regardless of their gender, for now we're stuck here in the present. Where we're being visually assaulted by these hysterical, hand-wringing, anti-choice posters on our daily commute and being fobbed off by the ASAI, who have decided that they want nothing to do with complaints about the campaign.

These posters and the people behind them are labouring under the delusion that they're helping and protecting women, when really all they're doing is trying to bully and shame them, us, into falling into step with their own beliefs.

The one thing that calms me down when it comes to self righteous anti choice shenanigans like this, is that the reason these groups are being so vocal and noisy right now is because they know change is on the way.

And if you ask me, change can't come soon enough.

This is an opinion piece. Please respect the opinion of others. Off topic and abusive comments will be deleted.