Amy Huberman will make you want this 'Pow' dress

Amy Huberman wore the Joanne Hynes Pow Boxer Dress from Dunnes Stores and now we want it too.

Amy Huberman took the kind of pic will all take when you've had a few wines and decide you want to take a mirror selfie of your nice outfit. She found a mirror, pointed her camera at it and snapped. I'm generalising here, though. When I say it's the kind of photo 'we all take', I'm really talking about me. I don't have a camera roll full of one picture with miniscule differences. I don't have the patience to take more than five snaps (even I know that that first one probably isn't going to be the best one). One thing is for damn sure, I won't be practising my angles in the mirror. Not ever.

Now, Amy Huberman is a very good looking woman. She's the type who can smile a goofy smile or make a silly face and you know she's still attractive. She doesn't have to practice her angles because she looks good from all of them. But I get that on nights out, there are now more cameras with phones than shots on the table (boo!) so you have to be prepared for a barrage of pics. It's probably a good idea to find your 'good side' if your friend group is the type to document every second of your existence. Still, I appreciate Amy's mirror selfie. I love an unposed celeb.

Amy had to take that picture because of the dress. Ah, that dress. It's from the Joanne Hynes collection for Dunnes Stores. If I had first seen it on the rack, I would have written it off as a pyjama dress. But, Amy makes me want to wear it to my next outing, whereever that may be.

It's a simple white based shift dress with an image of two boxers doing their thing. There's that signature Joanne Hynes 'Pow' behind them. It is very cool. I was wondering what shoes might go - I was thinking a block high-heeled ankle boot - but according to this second Insta post from Joanne Hynes's own account, Amy wore a strappy sandal.

It's one of those dresses that is simple but showstopping at the same time. It speaks for itself, so it needs minimal styling. It costs €100 but it could be well worth the investment. What say you? 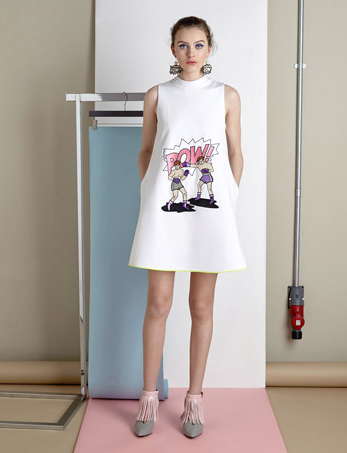