A Tale of Two Night Creams

Night creams are funny. I was told by a beauty therapist years ago to never use one because I had troublesome skin that could break out if smathered in lotion. I followed her advice for years but now I have a nighttime skincare ritual that involves all sorts of creams and serums and gels and other things.

I still ignored night cream. That is, until I was introduced to No 7 Early Defense Night Cream (which, as it happens, was third runner up at the Beautie Awards 15 so whatever my verdict is you know it's a readers' fave) and its fraternal twin Early Defense Day Cream. Both are aimed at young skin, and since skin is considered young until you're 35 and I am in the middle of a quarter life crisis so that kind of young skin news pleases me greatly, I jumped to try them.

The night cream felt lovely at first try. Really light and silky, not like other night creams that tend to be thick and heavy and it soaked in quickly. However, even though I expected it not to be, my skin felt quite greasy in the morning and a lot of residue appeared on my cotton pad when I cleansed in the morning. It could be because my skin doesn't need as much hydration (read, my face must sweat like a pig when I'm sleeping) but I was disappointed. I kept at it for a few weeks because I need that early defense, God dammit! I ain't got no portrait in the attic and I'm not getting any younger. But in the end I ditched the pair. For what it's worth, the day cream took ages to dry in, not ideal for my rushed morning routine.

I've just come across a new-ish range from Clinique (it appeared on counters in April.) The Turnaround line contains a treatment oil, moisturisers, serum, an 'instant facial' and an overnight revitalising moisturiser which is the one that piqued my interest the most. I feel like I need a night cream, is it not the last step in one's evening skin care routine? The aim of the entire line is to brighten up stressed out skin and the nighttime moisturiser is supposed to hydrate and improve texture while you sleep. 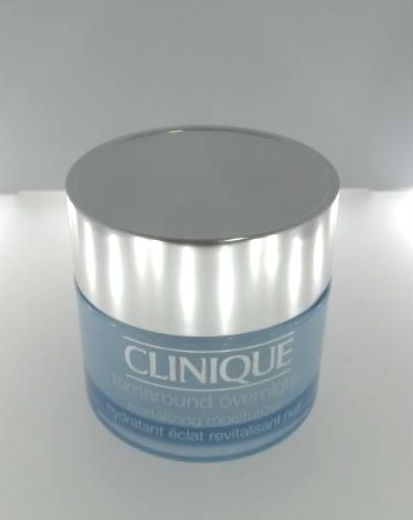 It's aimed at very dry to combination oily skin which covers all bases really. On first touch it's very nice indeed, light and low in scent.

I put it to the test and the results are in - I like it. It's much thicker than I previously thought, but then again you just can't judge a product by the back of your hand. It's not at Pond's Cold Cream Cleanser levels of thick but it's not especially lightweight. It did soak in quickly and in the morning my skin felt lovely. It was soft and hydrated, something I haven't noticed before on other mornings, and my skin looked less dull than usual. I am going to continue to use it and I'm tempted to try its sister products in the Turnaround line too.

Compared with the No7 Early Defense, this overnight moisturiser definitely comes out tops. My skin felt better and less greased up the next morning. In terms of price though, No7 wins. A 50 ml pot of Clinique Turnaround Overnight Revitalizing Moisturiser will set you back €52 while No 7 Early Defense Night Cream is €27.95.

Have you tried either? What's your verdict? Do you use night cream at all?

3 of the best cooling eye creams for tired eyes

5 of the best beauty products our friends ever recommended

Boosters: What are they and why are they the next big thing in skincare?

The best bubble masks to save, spend or splurge on