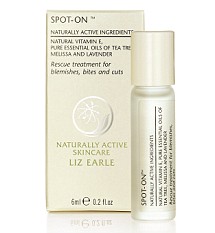 I had a horrid hormonal breakout over the weekend - you know, that awful periody zit that appears right on your chin, and right in time for Saturday night? Well, except this one was a triumvirate of hell: 3 boils bubbled up, and sure of course I couldn't leave well enough alone.

I prodded, I picked, I squeezed and I bled. I now have, what can only charmingly be described as a conurbation of broken, flaky skin, scabs and God-knows what else on my noggin.

But it could have been worse - the redness, inflammation and pus died down quick-sharp, meaning I stopped picking away rapidly, and I have to say, I have Liz Earle's Spot-On to thank for that. Packed full of healing tea-tree oil, anti-viral lemon balm and vitamin e, this is a power-house of a product.

One little vial costs £6.50 from lizearle.com, and will last and last, thanks to the clever roller-ball dispensing method.