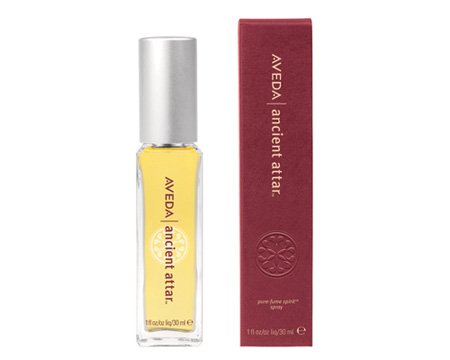 While Valentine's day is nice in sentiment, in reality, it's a holiday that's shrouded in crass commerciality and has lost its appeal for many. So that's one reason I haven't really written much about it in the run-up this year - I can't muster the enthusiasm.

There is one product though that I think would be lovely gift to give or get on the 14th, and that's  Aveda's new Ancient Attar, €75. Created from that eternal symbol of love, the rose, it's a present that would be thoughtful for that reason alone. But there's another excellent reason to buy - this product is born in Bulgaria and symbolises respect for the land, its workers and their human rights, and truly, I'd rather buy into that than a bunch of hothouse blooms.

Scent-wise, it's not for all. It is a warm, strong, earthy and heady rose fragrance that lingers for hours and is tempered with sandalwood and neroli. It has a spiciness due to cinnamon that gets washed down onto the rose fields during the spring rains, and that helps to mark it out as a unique scent.  If you're an oceanic, sugary or citrus gal, you may pass, but I love its full-bodiedness.

To find out more about Aveda's committment to the love of the land and their respect for ethical production practices, check after the cut.

Aveda, a company with a 30-year history, is leading the way in organic farming. With over 150 of their products reliant on lavender and rose essential oils, they've looked to Bulgaria for the solution. I went with the brand last year to see the production process for myself.

In a microclimate fostered by the protection of the Balkan mountains, the unique Bulgarian rose plant grows on land owned by the Enio Bonchev distillery. Seized from its owners under Communist rule and only returned in the 1990s, Aveda are now helping the company compete in global markets.

They don't just buy from the distillery - they're actively engaged in a partnership which has seen them support the introduction of pesticide-free cultivation, allowing the company to claim organic status for their crops, as well as invest in new equipment and facilities. No synthetic fertilizer, genetic modification or irradiation is allowed, crops are cut using traditional scythes, and the steam distillation process, used to extract the oil from the flowers, is the same as it has been for centuries.

Of course, there's more than a feel-good-factor in it for this beauty brand: while they've aided the distillery hugely with their investment, they've also ensured that a steady output of high-quality lavender oil and rose attar will be on hand to meet their own production needs for years to come.

There's a human rights element to the story, too. Romani people are contracted to harvest the crops by hand each July. It's seasonal work, but even so, Enio Bonchev ensure that they treat these migrant workers well, paying them by the day as the Romani's prefer, bussing them to and from the fields and providing daily meals. By our standards, this is no big deal  - but in a country where this ethnic minority is shunned, it's ground-breaking - and no other rose or lavender producer in the region currently follows suit.

Buy from Aveda counters at Brown Thomas Dublin and Cork, selected spas and salons including Whetstone, and House of Fraser, Dundrum.