Bah, Just WHY Are Mens' Razors so Much Better Than Womens'? 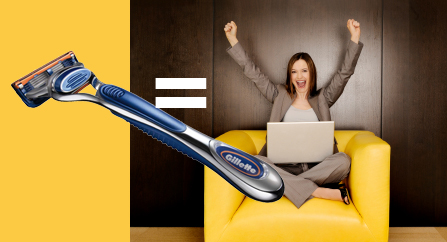 I still stand by my declaration that the Venus Divine is the best women's razor I've ever used. We all know though, in our secret girly hearts, that we're being sold madly short, and that lad's razors are truly the way to go.

I generally la-la-la-la that right out of my head though, as otherwise himself would have permanently blunt blades and I'd be in the doghouse. But the other week, I'd no Divine refills left, and legs like a hairy molly. Himself generously offered the loan of his Fusion."Oh wow!", I exclaimed,"that's so nice of you". "Ah yer grand", he replied, "the blade needs changing anyway".

Relationships, eh? They give with one hand, and they take with the other.

Anyway, even though by his standards it was blunty McBlunt, by mine it had the keen edge of a Samurai sword,  or one of Batman's Ninja Star yokes. It zipped up and down, razing and deforesting, and the shave it gave was so close I couldn't feel a whit of stubble afterwards. Gobsmacked, I was. Blown down with a feather, I was even silenced for a minute or two - no mean feat.

Sigh. There it sits in his cabinet now, teasing me with its prowess, speed and efficiency, while I'm back to my Venus, trying all the while to convince myself that it's just as good...