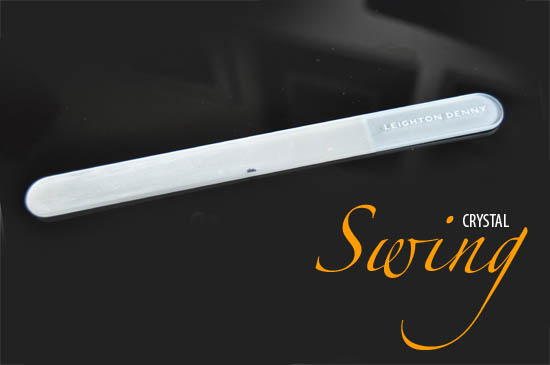 Having weak, split-prone nails that never get much more than a few millimeters past the tops of my fingers, and which all break at once (the lot snapped last week, no more mani swatches from me for a while) a glass nail file is something I always have on hand.

I was wary of these for too long, assuming they'd create a nails-down-blackboard screechy effect when pulled across fingers, but they really don't - glass files make shaping nails super-easy actually. They're quick, there's no friction like there is with emery boards and it's really simple to get a nice finish and shape with them too.

Glass files are also good for people like me who have soft nails that're prone to flaking and splitting - the fact the file's glass means it builds friction and heat as you go which helps to seal the tip, so water can't get in - a big problem for anyone whose nails flake constantly.  But a warning: you still shouldn't file in a sawing motion across and back, which is a common misconception about these fellers - it weakens the nail to do that, so file in one direction only at a time.

And what's my product of choice? I've lost and broken a few in my time but after my lovely little Sephora feller snapped in my baggage while on a flight, I caved and bought a Leighton Denny Crystal Nail file, which was about €20. I got mine in Boots at Liffey Valley and while it was a bit of an outlay, unless it snaps, I'll have it for ever: glass files don't wear down, and you can lash them under the tap if they start to get a bit clogged up too - et voila! A brand-spanking new file.

Have you got one?