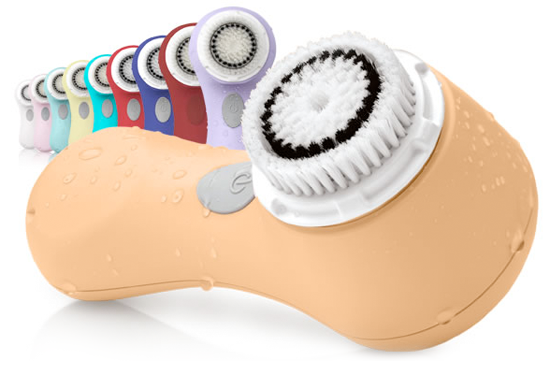 I've been putting off writing this review for ages because I really, really wanted my last post about the Clarisonic Mia, the travel-sized version of the motorised facebrush cleansing system, to be definitive. I wanted to be able to tell you either that it had improved my skin beyond all recognition or that it was an absolute gimmick and my skin looked the same after putting it through its paces.

The inconvenient truth is that my experience has fallen somewhere between those two extremes.

To recap, I've now had my Clarisonic for almost six months. After just a week of using the sensitive brush head for one minute a day in conjunction with my Eve Lom cleansing balm, there was a marked improvement in the condition of my combination skin that I haven't been able to achieve with a facecloth or muslin cloth or manual cleansing brush. The fine lines on my forehead were less obvious, my pores looked cleaner and smaller, I was less prone to patches of random flakiness, and my general complexion was noticeably brighter. Breakouts healed and disappeared more quickly than usual, but the Clarisonic didn't eliminate them completely.

Several weeks later, though, my usually blemish-free cheeks started to get proper spotty. That was no fun at all. Still, I persevered with what had become an almost automatic part of my daily routine, in hopes that it was just a temporary blip on the road to amazing future skin. When another couple of weeks passed and there was no sign of those spots on my cheeks abating, I have to admit that I ditched the Clarisonic in a fit of pique and reverted to using Eve Lom cleanser with a muslin cloth.

I just can't seem to get past what other users call the purging phase, where skin gets worse before it gets better.

This isn't a problem that everyone runs into, which is obviously good news for them but very bloody frustrating for me. Unfortunately, I have to conclude that Clarisonic is just not the miracle cure that my skin was hoping for.