Hmm here's an interesting one.  I thought this pair would be fairly evenly stacked against one another. 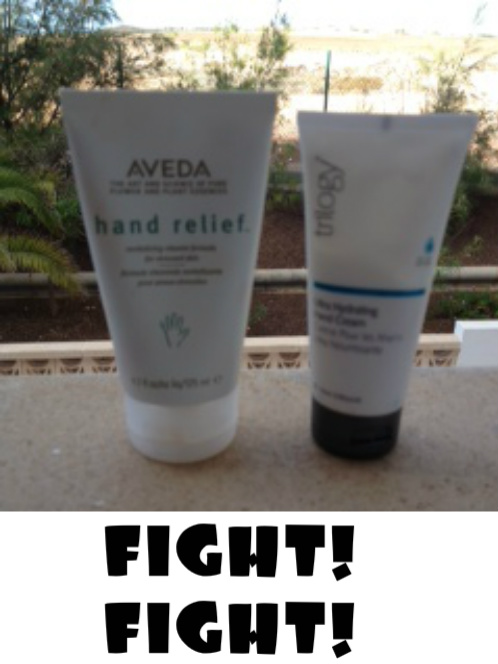 Aveda Hand Relief (oh we will NEVER get over our hilarious smutty thoughts about that name, sorry) is an old champion.  Along with Elizabeth Arden 8 Hour Hand Cream it's an old friend of mine and an absolute staple beside my bed, where I actually do remember to put handcream on every night.

Having run out of either I picked up another tube in the Carton House Spa recently (where I had my embarrassing drool on the floor experience during an Indian Head massage) and was instantly satisfied with it once again.  You can't improve upon perfection I thought.

Or can you?  I then went on to try the new Hand Cream offering from Trilogy.  I love Trilogy too, their Rosehip Oil is such a work of perfection that it's won the serum category with such a massive margin in the Awards for the last two years that we'll have to put it in a Hall of Fame or something if it does it again next year.

But this new hand cream is no great shakes at all I'm afraid.  Because I was using the two at the same time I was instantly aware of the difference in texture and consistency.  The Trilogy is far thinner and doesn't have that instant softening and rejuvenating effect that the Aveda does.

And although the Aveda offering seems more expensive at around €30 a tube you're paying for 125ml instead of €14.95 for 75ml of Trilogy.  You do the math - it's still not worth it. 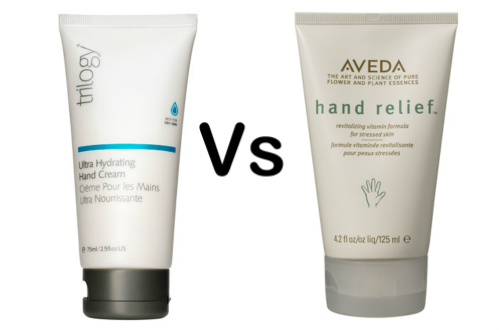 Now I'm not picking on Trilogy AT ALL with this next point (because it's standard industry practice to fool you into thinking you're getting more than you are) - but I don't know if you can see well enough in the slightly blurry photo I put up above that the Trilogy contents er "settle" in the tube.  I'd only used the cream twice when I took this photo on holiday and the contents only reach to slightly above the blue line.

So although the tubes don't look that out of sync with one another - you're getting more with the Aveda.  And it's hands down the better product (excuse the pun.)

And sure you can't beat a bit of hand relief eh?  Smut aside you can see who clearly wins this fight.  If you're shelling out for a luxury hand cream go for the Aveda.

Correction: I apologise to Trilogy - I made an error about the price - it's €14.95 instead of the €21 I originally stated.  However I still don't think it's any good - sorry guys!