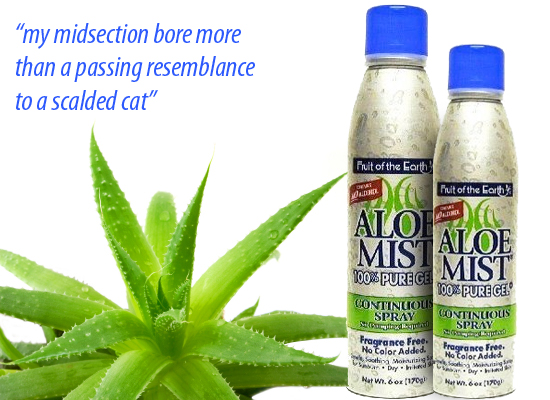 I'm not a very good ad for Beaut.ie at the minute. On Saturday, the last day of a week-long trip to Sicily, I managed to - I can hardly bring myself to admit this - get sunburn. Ridiculous in this day and age, right, with the amount of awareness there is around sun care and sun exposure and skin cancer? Well, it's not like I threw caution to the wind at the tail-end of the hols and slapped on the cooking oil in an attempt to brown up: I'd packed some gradual self-tanner for that job.

No, dear reader, in this case the truth is perhaps even stupider than fiction. I forgot to apply suncream to my not previously exposed stomach when I decided to strip down to a bikini from a sundress at the beach. A couple of hours later, my midsection bore more than a passing resemblance to a scalded cat (one of those freaky hairless wrinkled ones) it was so red raw. And a few hours after that, despite lashings of aftersun, there was no sign of either the pinkness or the sensation of being gently boiled abating.

After a rummage around the bathroom on our return home, I unearthed a bottle of Fruit of the Earth Aloe Mist Spray. It's basically just aloe vera gel in a handy spray, with no alcohol or added colours or fragrances, and the relief it provided was instant and long-lasting. Not actually having to touch irritated skin to apply the product only added to the bliss. So while I'm pretty well freaked out about the severity of the burn I received, at least the scalded wrinkly cat look is on the way out...