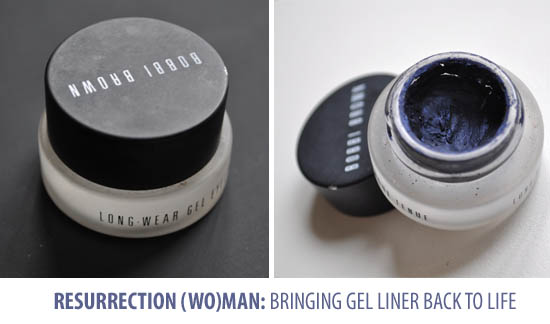 Anyone who's into gel liners knows just how revered Bobbi Brown's Long Wear offerings are, and they're lauded for a reason: they're blimmin' excellent. Dense and creamy, absolutely saturated with colour, long-wearing and easy to use, they're the best I've ever tried, and yup, they'd want to be at €22 a pot.

The problem with Bobbi's linery offerings - and pretty much all gel/cream liners - is that they're prone to drying out. There are some things you can do to limit that like not leaving lids off for too long while you're making your face up and screwing those lids on super-tightly, not leaving the pots in very warm rooms, but because these products are wet and creamy, the moisture will just eventually evaporate.

If you don't use your liner quick enough, you'll be left with a mini Gobi desert inside your expensive glass pot. That little feller above contains about a half quantity of Sapphire Shimmer, which a quick search through the blog reveals I bought back in 2008. Erk! It's probably best off in the bin but as it's not quite dead yet, merely stiff and not very workable, I wanted to see if I could resurrect it from its coma state.

Emboldened by my recent success at saving a shattered Inglot blusher, I got thinking. From watching YouTube tutorials on how to create lip palettes from lipstick bullets, I knew I'd need some heat. I also reckoned I'd need some sort of mixing medium, but as I'd never come across a gel liner fixin' How To, for the rest of it, I was on my own.

Here's what I improvised: 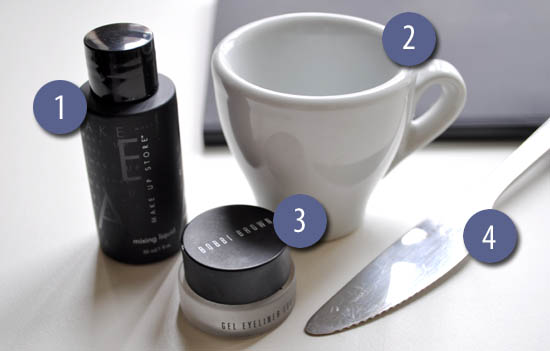 So, what'll you need? Bearing in mind this was pretty much trial and error on my part, I picked: 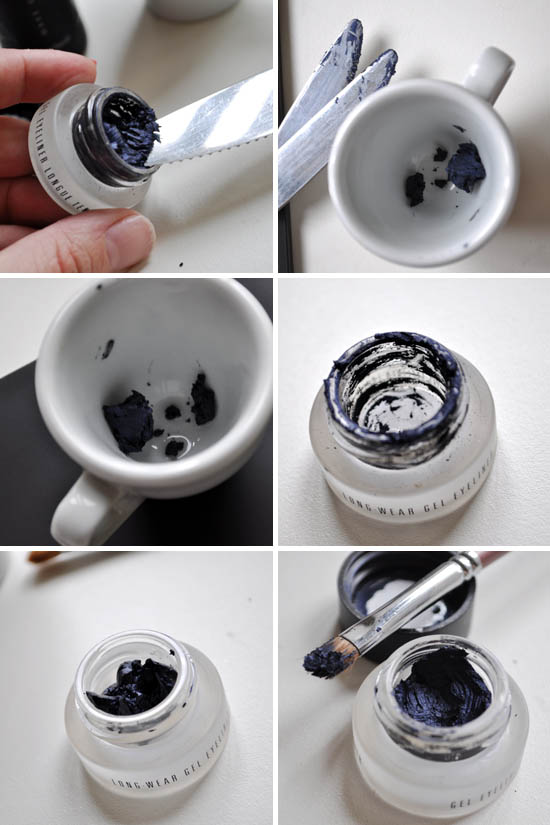 And here's what you do - it's fierce easy.

I then screwed the lid firmly onto the pot and left it for a bit.

So, did my ministrations work? Actually they did. The liner's a little different to how it was when new, not quite so firm in texture (but neither is it as thin and fluid as the Catrice one, for example) and it seems to have lost some opacity too, though it's still very buildable; another slight minus is wear doesn't seem to be quite as amazing as it used to be. But I can use it again, which is the main thing, so all in all, I'd rate my rescue as pretty darn successful!