Intimate Moments: Has YOUR Fella Asked YOU to Perform Weird Beauty Treatments? 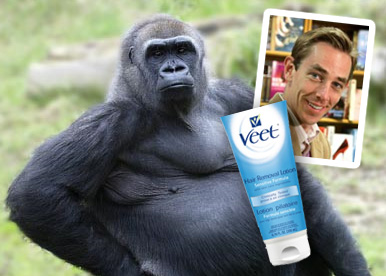 We got an e-mail from one of our beaut.ies recently. She's a fab, gorgeous lass and is in the midst of the modern battle more commonly known as dating. Here is one of her most recent experiences ...

Right, well when the first date at his place goes well, including me managing not to throw back too much Dutch courage, I had high hopes for the second date. The food and general ambience wasn’t bad at all, well, up until he ‘shushed’ me to be quiet as he’d missed something of huge importance that Pat Kenny said, and so when there was a bit of throwdown *wink wink*, I waltzed towards date number three without a second thought.

Ok, that’s a little lie. There were a few moments when he said something and I really wasn’t sure if he’d actually said that, and maybe he had one or two little ticks, funny gestures, let’s say, but the whole thing had potential. He didn’t have two heads or lobster claws instead of hands. He had a very hairy back though. Very. Hairy.

Date number three was him cooking, again. He said he’d been busy in work and wasn’t in the mood to paint the town red, again, but I thought it’d give us an opportunity to chat, y’know *wink wink*. This date was on a Saturday and while I didn’t expect him to consult me on what food he’d cook, I do think he would’ve asked me if I minded watching ‘Tubridy Tonight’ – and this was after food and a quick bit of dessert in his bed!

Anyway, at one point he asked me a question, something he’d asked me on date number two, I now realise, but at the time I thought I’d completely misheard him – think of the funny ticks 'n tendency to be a bit odd…

I’m sighing as I write this, you just don’t need the details, but I decided to do it for him to get a bit of peace and quiet really. I know. I actually did do it. It wasn’t the most simple of procedures, let’s say.

I just kept pushing his face back into the pillow and told him to shut up, that I’d been using this stuff for years and that I bloody well knew what to do!

After I scraped the last of the Immac off his back, almost gagging each time I had to wipe the long black hairs off the spatula thingy and had also shaved the little tufts of hair he had on each shoulder – ‘I don’t Immac those bits, my skin is too sensitive’ – I just couldn’t believe that not only had he asked me to do that, but that I’d done it as well!

So, I said to him, ‘you’ve been single for a while now, can I just ask, who normally does this for you? Cos surely you can’t do it yourself?’

His reply was that yes, his ex-girlfriend used to do it for him but obviously she doesn’t do it now.

*NEE-NAW NEE-NAW* The alarm bells started ringing, all I could think was surely, not, no, surely not..?

SO WHO DOES IT THEN? I COULD BARELY BREATHE WAITING FOR THE ANSWER!

‘… so cos she won’t do it, my Dad normally comes around and does it for me’. Cue stunned silence for about five seconds until I ran into the loo, buried my face in a towel and attempted not to howl the nice D4 apartment down!

Are you shocked into silence? But slowly your mouth is turning upwards and you know that you’re going to be laughing your head off at this one very soon?

Me too. Every time I think about it! And I’m the one that did it for him!

The next day I got a text from him ‘Great Treatment! Back not red at all!’

What do you reckon gals? Is date number 4 in the bag, or what? And what we want to know is, have you had any weird requests for beauty treatments from someone you've been seeing for less than a wet weekend? Our collective minds, they are boggling!

I love toner. There, I've said it.

Beaut.ie Christmas Nail Art Tutorials: What Do *You* Want To See?

Oily Skin Dos and Don'ts, from Vichy, Who are Clearly Reading Your Minds

Expert Advice: Should I Go Darker With my Foundation?

Expert Advice: How do I Get my Makeup to Look Glowy and Natural?

Expert Advice: How to Cover Up Dark Circles & Brighten Eyes