Welcome to part two of Juliette’s occasional series on Beaut.ie, where she chronicles her journey through the business of getting wedding wonderful as she prepares to marry her Mr Right. Here, she narrowly avoids cleanser catastrophe, before lashing out.

After my post on cleansers, I got all giddy about the prospect of a super-luxe product, and was nudged in the direction of Eve Lom. Very willingly nudged. In fact, I probably started running first.

Having had some trouble with cleansers, I asked a stockist if I could swatch a little on my wrist to test for sensitivity, and was very kindly given a gorgeous sample, complete with muslin. Treats! The consistency and meltiness was gorgeous.

Really indulgent, but I have to say, the smell was a little odd. To the point where my fiancé said I smelled "like a big room in a castle". Musty then, yes?

Now, I could handle that, but it kind of kills the romance when one of you smells mouldy. And then this morning, the unforgivable: Breakout. Nooooooo!

Very glad I didn't try this closer to the weddin'. Back to Cetaphil, so. Humph. The porridge of cleansers. I'm glad to say that it's treating me very well though. Ahh Cetaphil, you reliable old sod.

And, I've discovered that if I use some rosewater afterwards, I get the sensory treat I was craving. 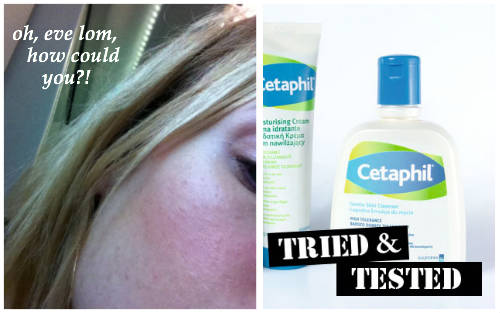 I had the pleasure recently of dipping my eager toe back into the acting world for a one-day job. It's such a treat when these come along, and I threw myself into it wholeheartedly.

I had one scene in which I said a couple of lines and punched the lead actor in the shoulder in a king of "Hello mate!" way. Now, the script called for a slightly manly woman (I am 5'11 and a half), but nothing prepares you for when the director takes you by the arm and says, "Right, so walk up to Toby, punch him in the arm, snog the face off him, drink his beer and burp, ok?" Delightful. I'm so glad I was able to rely on my childhood trick of burping on command.

But back to the niceties... The makeup artist on the job, Linda, was sporting some fabulous lashes. Turns out they were eyelash extensions, from a salon in my neck of the woods. And she only got a half set, for €40. Sweet!

The lovely Linda was all ears when I told her I was getting married, and even stayed lovely when I ventured that I would be doing my own makeup for the wedding. Her number one piece of advice? Lashes.

She says that she tends to use individual lashes on brides, and can place up to 30 per eye. I am not a fan of false eyelashes, however. I find them heavy and couldn't imagine wearing them all day, through tears, sun and photos. So I thought the extensions would be just the ticket. 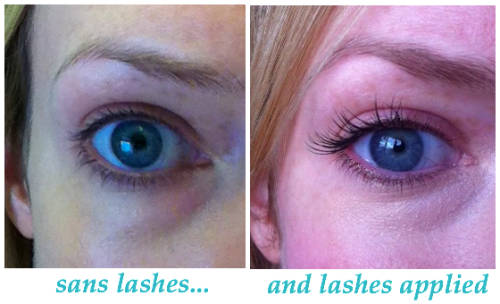 Linda advised that I get my eyelashes tinted the day beforehand. So I hotfooted it to the salon for the tint, followed the next day by some Hollywood lashes, which they applied with the "organic" glue. I chose the 12mm ones, but they come in 30-odd sizes depending on thickness, curl and length.

Now, this is not for the squeamish: the therapist taped my lower lashes down. Eeek!

It didn't hurt, it just felt a little Clockwork Orange, but once I got used to it I was ok, particularly once the eyes were closed. There was some discomfort when the treatment was over, as one lower lash seemed to have gotten stuck to an upper, but I could handle it.

The results, though, were gorgeous. Really lush, eye-opening and fresh. And like Lynnie, I felt I could wear a lot less makeup. You do have to alter your cleansing routine somewhat, and I found I avoided much eyemakeup because it's tricky to remove. But the lashes lasted over three weeks, and I only lost about three or four 'em.

Still, after three weeks, I wanted those puppies off, as the ones I lost took my own lashes with them. So, I tried an oily eyemakeup remover and they simply didn't budge. Good news for their lastabillity: I probably could have kept them on another week.

I returned to the salon to have them professionally removed (€10), which felt like my eyelashes were being pulled. It wasn't too painful, just uncomfortable. My lashes all seemed present and accounted for, but - and this is an annoying bit - when I got home and tried on mascara, my eyelashes were definitely shorter. Nooo! They just felt a little more stubby.

Funny thing is, if they regain their normal appearance, I would definitely consider getting them for the wedding as they're everything I love for bridal makeup: fresh, youthful, glamourous but not OTT.

And, in the name of research, my lovely beauties, for comparison's sake I applied some Ardell demi wispies to one eye, and some Eyelure individual lashes to the other (about 4/5 clusters), to test them out. The Ardell are on your left (my right eye). 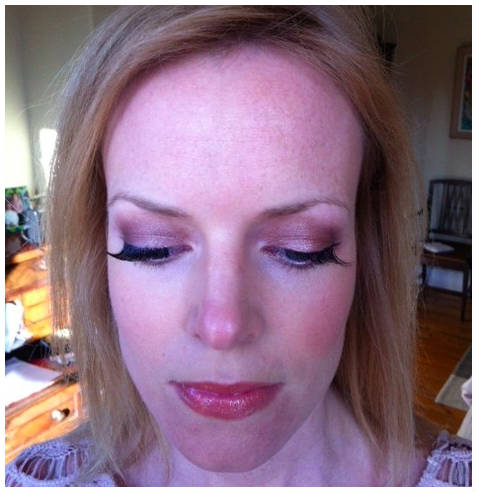 Yup, I still don't like full false lashes, and find the individuals fairly pesky, but the result is lovely.

If my eyelashes do take too long to recover from the extensions, I think I'll go with the individual ones. Here's hoping my hands aren't too shaky!