Makeup bag takes the weekend off 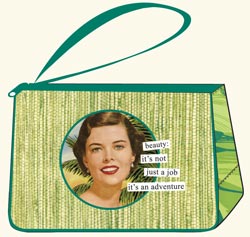 When I got up on Saturday morning little did I know of the impending doom facing me over the weekend.

Dear readers, I had accidentally left my makeup bag in Work the day before. Not even my spare makeup bag, not the makeup bag with a few bits and pieces in it - but the whole shebang, the Main bag.

Now the Beaut.ie Crab has never crept into my bursting makeup bag, but if he had, his beady eyes on stalks would have spotted all my can't live withouts - the Mac foundation, the Stila eyeshadows, the selection of mascaras, the Smashbox blushers and lippies... the Bobbi Brown gel liners... oh I can't go on...

"Sure what's the problem?" said the husband. "You've about ten tons of stuff hanging around the place. Use some of that."

So bravely I tried to make the most of it. Lipstick and eyeshadow were grand - it was the base that got me unstuck. On Saturday a friend asked me was I ill, because I was the colour of the tomb with black circles under my eyes - hmmm so that's why I don't use that foundation any more I thought and threw it in the bin. And that concealer clearly doesn't work either. On Sunday, mineral foundation caked around my nose in the most horrible way and the bronzer I used made me look as though a dirty protest were playing itself out on my cheeks. On Monday I was the embodiment of a satsuma with pink cheeks.

I wasn't in Work til Tuesday. I rang up on Monday morning at 9.01am to check that the beloved bag was actually safe on my desk. A male colleague answered the phone. Feckity feck, I knew I was in for slagging so.

"Will you check if I left... my makeup bag on my desk" I said in a little voice

He returned to the phone sniggering "The bright green one with "Beauty is not just a job... it's an adventure!" written on it, is it?"

I'll never hear the end of this.