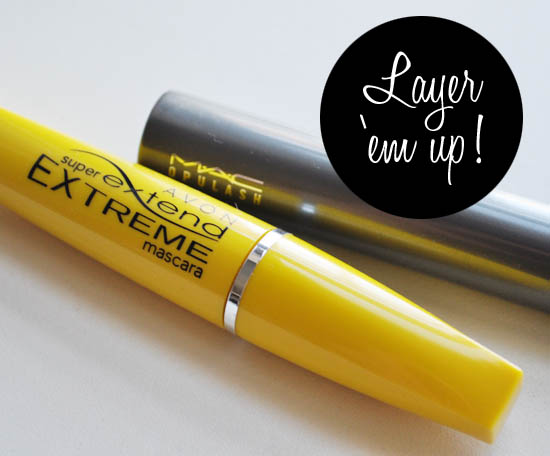 Legging it out of the office the other evening to meet a pal for a bite of food and a catch up, I was hurriedly refreshing my makeup in the loo. It's easy enough to do a patch-up with a bit of concealer, tidy liner and shadow and re-apply lipstick, but mascara is a whole other beast, isn't it?

In fact, dear Beaut.ies, I'd wager there are very few of 'em out there that you can apply in the morning and then add another layer or two later that day without your lashes turning into really horrible-looking clumpy spiders legs of awfulness. I've learned this the hard way: Benefit's They're Real is definitely not one that you can do a touch-up on for example but recently, and quite by accident I've discovered two that play fair with reapplication.

New from Avon is Super Extend Extreme Mascara which is in the April catalogue for €12. It's actually not that spectac a product but it's fine for some definition and light volume for day. What I've noticed about it - and what you might have guessed, y'know, cos of the subject of this post - is that it doesn't have a tantrum if you add some more a few hours later. And I appreciate that. Thanks guys.

The other one that plays well all day is Mac's Opulash, €16.50. Not a new or terribly well-named product, I don't find this very opulash-y at all as it happens, but I do like the soft effect it gives for daytime and have rediscovered its ways of late. Again, it's calm under duress and doesn't baulk when you layer some more on.

I suspect the reason both of these are layerable is that they're not waterproof, they feel quite soft on the lashes and they don't do that that crunchy, setty thing that some mascaras do - you can never successfully add more with those sorts once they're dry.

So - there endeth the results of my Extremely Scientific mascarasperiment. Do you have a favourite lash-flatterer you like to layer? Or one that's really dreadful and should be avoided in a day-to-night makeup bag at all costs? Tell us in a comment!