Guerlain is a luxury brand that just gives us the swoons. Old men in flat caps tell stories about the magnificent Terracotta bronzers as their grandchildren huddle around the fire, and just opening the packaging on these products makes me feel like I am holding the Holy Grail.

Their Météorites Perles have a cult following and it's no wonder, it's one of the fastest ways I know to healthy and radiant looking skin. They give a gorgeous subtle glow without being shimmery, great for giving some life to those foundations (matte coverage, I'm pointing the finger at you) that can sometimes look a little flat.

But in the words of S Club Seven, reach for the stars and sing hosanna to the shooting ones (I added that last bit), for Guerlain have released their Meteorites Blossom Collection for Spring 2014 and it's in stores now. 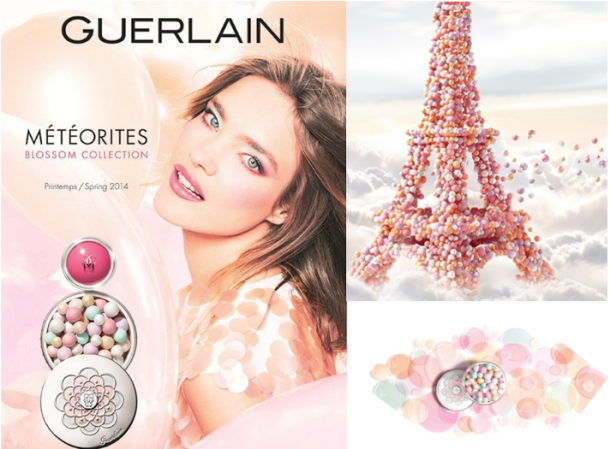 They have added three new beautiful illuminating powders, all working to hide flaws and add radiance to the skin:

And a new brush was launched to complement the range (€35). The natural bristles are longer and softer than the original, and it's designed to just pick up the right amount of product needed. So you don't have to worry about looking like a bag of skittles.

These little swirly balls can be a bit baffling but just think of it as a powder - the only difference is that it is pressed into brightly-colured balls (why can't I stop hearing Nicole Scherzinher saying the word baaawwwwllls in my head?). And don't worry, you won't actually see those bright colours on the face. They magically blend to even out skin tone and to brighten the skin, and each colour has a different function. For example, the light lilacs catch the light, the pinks brighten the complexion, while the greens will correct redness. Them's hard-workin' balls.

It's kinda like having your very own lighting crew following you around, making sure the light diffuses to give you gawjus glow-y skin. And who wouldn't want that?

These babies are on counters now and will set you back €48.

Are you a fan of the original Météorites Perles? Are you tempted to by their beautiful baaawwls? Tell us in the comments!