Oooh La Lancome! I Fall for a Mascara (again) 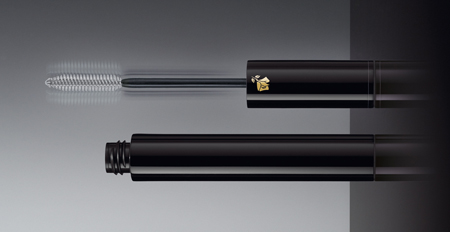 "BZZZZZZZZZZ BzzzzZZZZZZZzz", went my buzzer at 9am yesterday morning, throwing me into a panic. "Eeeehhh", I screeched down the intercom, "I'll be down in a minute!". There I was in cow-print jammies and not a child in the house washed. The poor fecker from Cyclone couriers probably didn't know what to make of me as I scuttled out, blinking into the sunlight, skirt haphazardly thrun on over PJs to fake some sort of, 'yes, I am up and ready to face the day in a go-getting fashion', ambience. Yeah, I'd say I convinced him alright.

Back upstairs I went, rifling through the mala I'd just signed for. Lancome's new Ôscillation mascara, apparently (Lynnie's already given us a heads-up on this forthcoming launch). Oh, now this early morning jolt was starting to look a little more worthwhile. I took it out. I ripped the plastic asunder. I admired it. I pressed the button that makes it do its magic.

So then I tried it. WOW. It's so brilliant. It's so feckin' lazy it beggars belief. You just STAND THERE AND IT PUTS THE MASCARA ON FOR YOU.  On. For. You. No zig-zagging, no annoying trying to get it up on top of your lashes as well as underneath - nope, Ôscillation just does it all. All you need to do is press the doh-dah that makes it buzz, and slowly move it from the roots of your lashes to the tip. You get fat, long, separated lashes and it's bluddy brilliant. The mascara-gunk is pretty good too - nice and black, it's non-clumpy stays on all day.

Of course I wore it yesterday, and at two meetings insisted on being admired. "LOOK AT MY LASHES", I commanded, making people who couldn't care less coo and oooh and ahh over the super-duper powers of this new magic mascara.

Now I haven't lost the run of myself so much that I don't know it's just another marketing gimmick - vibrating razors, anyone? - and at €35, it's a bit of a splurge, too. But they've convinced me, they really have. Ôscillation is available from October 15th at Brown Thomas stores and will then be available nationwide from 15th November - start saving.