Overdose of "Just for men" causes grave embarrassment: blacker than a pint of Guinness

I've often wondered about all those "Just for men" hair dye products.

They spend so much time pretending that they're not actual hair dye and in fact are just something a real man casually combs or showers through to produce a "natural result".

Men are terrified of ending up with a blacker head of hair than Marty Whelan before he was persuaded off the bottle.  So everything must appear to be natural and just a simple "blending away" of pesky greys 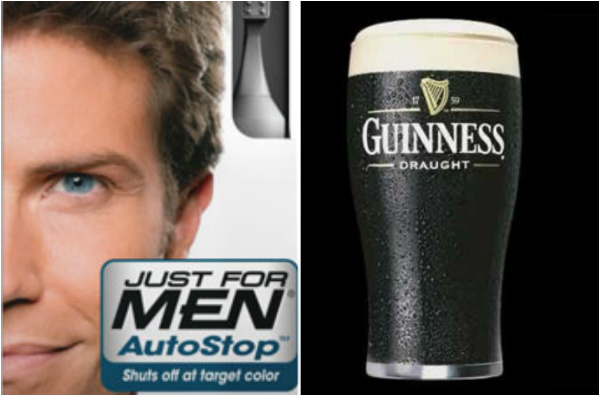 I mean obviously men would never be doing anything as poncey as dying their hair. Unless it just happened by accident as the Grecian 2000 bottle seems to suggest.

I was at a meeting recently with two men. I have no idea how the subject of grey hair came up, but the guy across the table said he was becoming more salt than pepper.  "You are" I said in approval "It suits you.  You know, silver fox and all that"

"Hmmm I suppose" he said, looking quite pleased.

Encouraged, I rushed in with "Grey hair is SO nice on a man.  Who the hell dyes their hair off their heads anyway - it looks awful!"

I was met with a terrible silence.  Everything seemed to go into slow motion as I turned my head to look at the man beside me.  His hair was jet black and he hadn't seen forty for a few years.  I knew it was dyed because it had that terrible flat light absorbing quality and total absence of "tones and highlights".

Ground. Please. Swallow. Me. Up.

This was a fox paw on the level of me "french kissing" another man at a meeting last year in an awkward cheek missing, lip clashing, juicy lipped cringe making encounter.

So who's buying these men hair dye products anyway?  Does your fella indulge?