A couple of days ago, the world stood still. Well, Ireland did. 'Twas the Hottest Day of The Year, you know, and the country divided itself into two collective thought entities: one whose sole interest was sunning themselves and the other to complain about the heat.

The Divergents of the country were the ones who appreciated the non-rainy or windy weather, and went about their daily business of going to work, and minding the kids and drinking tea because it does cool you down, don't argue with us, and checking out the foundations that won't melt off your face.

In her particularly informative article, our beauty writer and professional makeup artist Sarah Jane fleetingly mentioned her latest discovery: heart-shaped sponges from budget brand Essence, that as well as being super cute, she says they work well for blending around fiddly areas like the eyes and the nose. 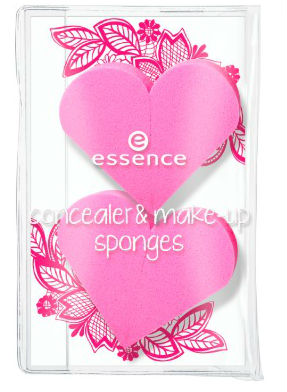 My interest was piqued because I have a bad habit of becoming disgusted by expensive makeup sponges after a few weeks, even though I do wash them and keep them clean. (Maybe it's the recurrent memories of those maggots in the Beauty Blender. Remember that?) Anyway, because of that, I am always on the lookout for budget or eco-friendly disposable versions.

I've tried the Penneys own-brand beauty sponge that looks exactly like the Real Techniques blender that I really like, and sorry guys, but it's a hard no from me. Hard being the operative word, it's rock hard! And it doesn't get much softer when wet. It also doesn't actually blend very well.

I have little white triangle-shaped sponges from Forever 21 that I thought would be handy for on-the-go touch-ups but they are too soft.

So instead of buying the coffee I admittedly did not need yesterday, I picked up a pack of the Essence sponges and hip, hip, hooray, Sarah Jane was right! They are great for blending the small, fiddly areas of the face. They'd be fine for blending your entire face if you had an extra half-hour to spare.

Have you found any budget versions of high-end tools that are entirely able substitutes?