AW11 Trend Alert: The New Blusher And Where to Wear it 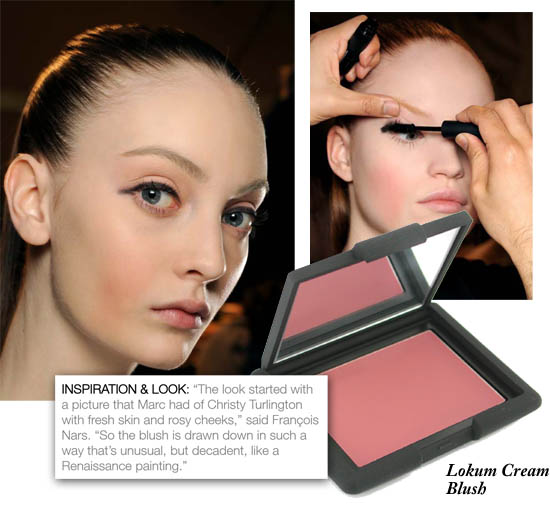 Now lookit, I don't want to be responsible for causing an outbreak of mass hysteria here, but there's something that I think you really ought to know. Just to be on the safe side, maybe you should make yourself a nice cup of tea and have a biscuit and sit down for a minute before I break it to you.

It's entirely possible that you're not wearing your blusher in the right place for AW11.

If you thought that it was as simple as wearing it on the right set of cheeks and getting a glow on rather than looking like the lovechild of Bosco and Aunt Sally, well, may Estée Lauder have mercy on you.

Seriously though, this season's blusher is a peculiarly low-slung affair. Instead of concentrating their perk-up products of choice on the apples of the cheeks, the make-up maestros at Marc Jacobs, Prada, and Oscar de la Renta used them beneath the cheekbones where they did double duty, providing a pop of colour in addition to a sculpting, contouring effect.

To emulate the look, suck in your cheeks and either blend blush into the underside of the apples (à la Francois Nars for MJ, above) or sweep your reverse Nike-alike swoosh of colour in the hollows rather than atop your cheekbones.

Pinks, corals and peaches work well here and the end result is a natural-looking, just-in-from-the-cold flush that's grown-up rather than girly. Team with a little highlighter to finish.