With Halloween just around the corner I think it's timely that we have a full and frank look at the so called 'Vampire Facial'. It's a catchy name because who after all doesn't want to look like a deathly pale, exhausted and psychopathic vampire? I jest of course: you won't LOOK like a vampire, you'll just be injected with your own blood in a cosmetic procedure which makes bizarre beauty treatments like the Bird Poo facial seem positively delightful.

Whenever I've been invited to try out a Vampire Facial for myself I have politely declined.  With absolutely no scientific backing or proof of results I really don't want to put myself through hundreds of painful injections in my face.  And I don't care what anyone says, or all the numbing cream that's applied: getting needles repeatedly stuck in your face hurts. 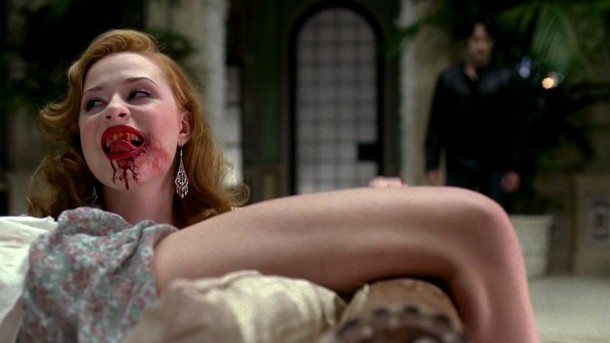 Mary wasn't sure about her new therapist

Anna Richardson whose opinions I trust because she is honest, says this treatment sucks. It sucks harder than a predatory Lestat after 300 years in a coffin. People regularly report black eyes (see Anna above), bruising and uncomfortable swelling as well as the discomfort of the procedure.  And while it may provide a temporary effect this won't last.

I was badly bruised. People stopped me in the street to ask if I’d had an accident. It’s quite brutal. I saw results after two weeks and then my bags soon came back.

Vampire Facials have actually been around for over ten years as PRT, but it's only with celebrity endorsement from the likes of Kim K, Anna Friel, Danni Minogue and model Bar Refaeli that they've entered the mainstream.  They work on a principle that's been used in healing sports injuries and burns - blood is taken and spun in a centrifuge to separate out the various constituents, including plasma which is referred to as the 'liquid gold' of the treatment.

Investigations by The British Association of Aesthetic Plastic Surgeons have found that only 40 per cent of people will see any temporary benefits at all.

Costing over €500 a go and with three treatments recommended to see full "results", committing to a course of this will cost you a small fortune.

So far, so much quackery.  Save your money and buy a nice serum.

Have you ever had, or considered having, a Vampire Facial? What is the strangest treatment you have ever heard of?

For more, see On Beauty in The Irish Times