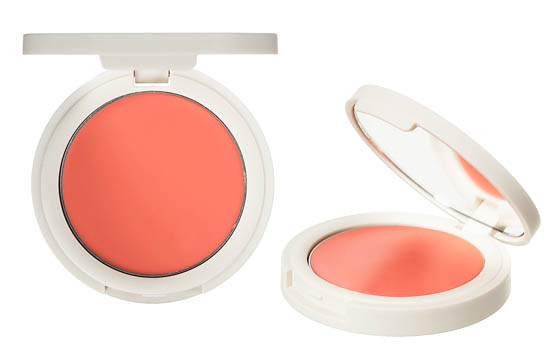 This here is a blusher from Topshop's new-ish make-up line, and I am currently truly, madly, deeply in love with it. It's a flat little flip-top polka-dot adorned container of cream-to-powder blushery goodness that feels featherlight on the skin and maintains a small amount of its creamy sheen when applied, but not so much that it feels sticky or causes foundation to slip around underneath it.

I dithered between the orangey pink shade that I eventually bought, Flush, and one of its shelfmates called Pinch, a super hot pink,  for an age before settling on the former. At €12 a pop, I couldn't afford to buy both the week after Christmas, but I think the coral tones of Flush actually work extremely well with my new brunette 'do. This is a colour that does exactly what it says on the tin and delivers a subtle, outdoorsy glow that's perfectly pretty and daytime appropriate and really suits fairer skins.

While all these Topshop cream blushers look fairly extreme in the pan, they're actually quite sheer and blendable on the cheeks and can also be built up to give a more intense colour. I might just have to add to my collection when payday rocks around.