The Irish goodbyes: The neverending phonecall and the night out Fade

Irish people are incapable of ending a phone conversation.

We've invented lots of phrases like "sure I'll let you go now" and "I've kept you long enough" and all that jazz to try to end a long and rambling phone conversation.  But it doesn't always work.  For instance if the person you say that to is your mammy, she'll invariably interrupt with an "Oh I forgot to tell you!" and launch into another anecdote about Brigid up the road, or someone you vaguely know who's developed a horrible illness. 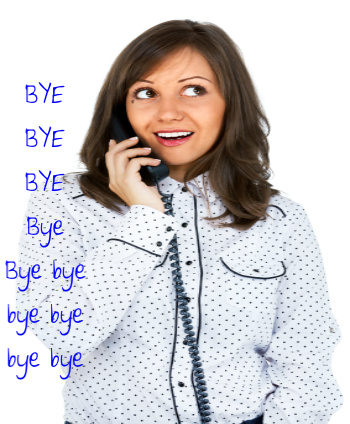 To which twenty minutes later you'll STILL be trying to escape and using every excuse under the sun.

When did we start saying "Bye" a hundred times at the end of a phonecall?  Americans can't get over this.  They hang up the phone - WITHOUT EVEN SAYING GOODBYE.

It's just a click and the conversation is over.

But on a night out we're quite different.  In America leaving without saying goodbye is known as "The Irish goodbye" ( according to Dee from Viva Adonis).  In Ireland it's known as The Fade.  To go around saying goodbye to everyone takes bleedin ages at the end of a long night when you're knackered, probably have a few on board and just want to head.  So it's easier to Fade.  Simply slip away.

Are you guilty of either of these?

Video: Every Irish family ever preparing to go on holiday

'I'm leaving the passports on the HALL TABLE'

Irish woman takes her skirt off over airport security delays

HUGE Oscar nominations for the Irish!

A great time for Irish cinema

What Brands Do the People of Ireland Trust the Most?