Last week's post on that stellar Smashbox liptint in Guava - a bright, coral-y orange - as well as this season's prelediction for bright lips has led to lots of scratched heads as we work out what to wear on our eyes. As per Lynnie's advice, a nude eye looks the most chic with a matte neon pout, but if you can't go it alone or with minimal eye makeup, grey's a great choice.

Happily, pewter suits most eye colours too and for years the shade's been an old reliable of mine for when I'm wearing a bright lipstick. I knew I had a couple to hand, so I thought I'd do a swatch post for you al - on my two or three of 'em, like.

And when I think of slate-shaded lids, I immediately hone in on Lancome's cult Erika F shadow, a shimmery, olive-toned wonder that's a bloggers delight. I've found a dupe for it before in a Gosh Trio, Diamond Rock, so I knew I'd include those in the post, but I wasn't quite sure I had *quite* enough graphite tones to pad out a decent enough post, so I popped to the local chemist.

To be sure to be sure, I bought a Catrice solo shadow and an IsaDora quad, came home and got busy in my boxes, and realised that I could have easily saved my cash: I apparently already owned about a gazillion grey eyeshadows. Sigh. Still, I'm sure my new purchases will get some love and as I couldn't, as it happens, lay my hands on either Erika F or Diamond Rock (check them out in this post instead) when push came to shove, I'll use my two new purchases to supplement this post.

Anyway, without further ado, here are 13 differing greys. Thought it was a boring colour? Think again, bitches! My boxes yielded shimmers, mattes, glitters, cremes and pigments in tones that went from slate to barely-blue and almost-olive, cool and warm, across price-points from tiny to terrifying. That's why I love grey - and if I've anything to do with it, after this post, so will you. 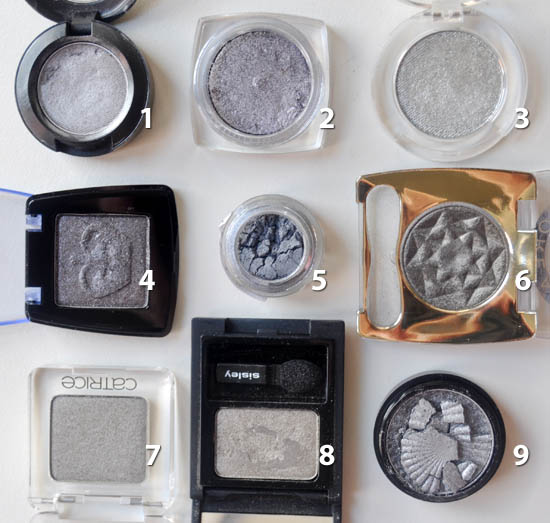 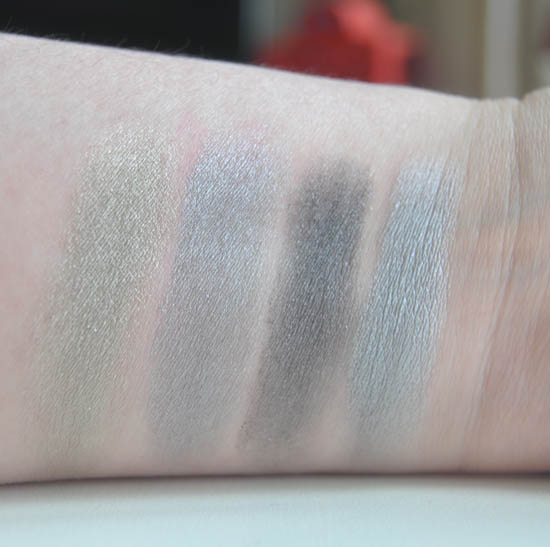 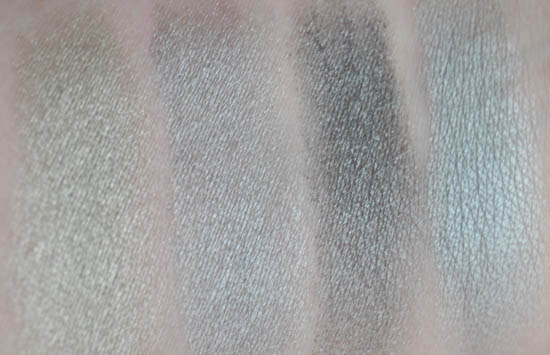 From left to right, Catrice Absolute Eye Colour in The Noble Nights (very, very like Erika F, a fact I'd confirm if I could, y'know, find Erika F), Barry M Dazzle Dust in 10, Rimmel Colour Rush Mono Eyeshadow in Glam Rock (we've admired this baby before) and Mac Eyeshadow in Elektra. 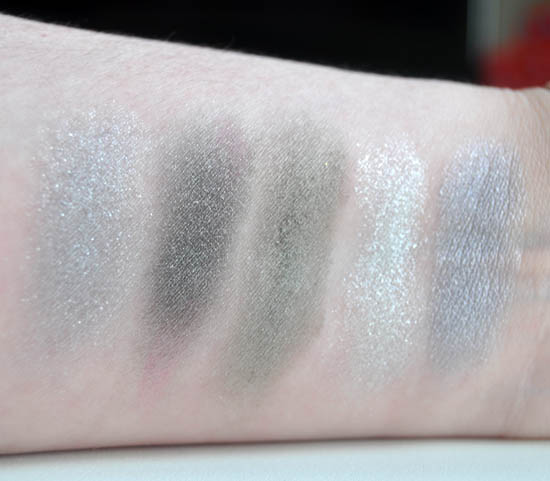 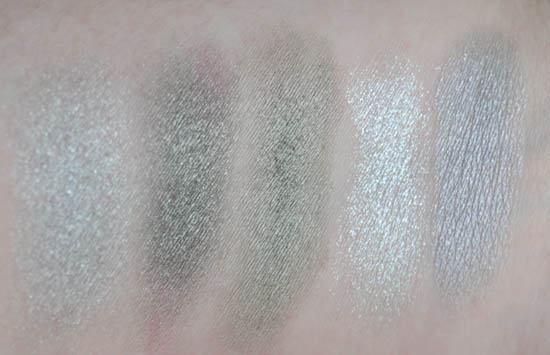 From left to right, 17 Glitter shadow in Spirit (clearly a madly soft and shattery shadow, this was a bit of a nightmare to work with), L'Oreal Paris Chrome Shine in Starry Black, Sisley Phyto Ombre Eclat in Stardust (another Erika F dupe, peeps), MyFace Blingtone in Silver Screen and L'Oreal Paris Colour Infallible in Flashback Silver.

So, they're clearly all single eye shadows and in fact the only really expensive one here is the Sisley offering - it's about €25, if memory serves. MyFace Blingtones are pricer than I think they ought to be at about €15, but there's a lot of choice here for under a tenner - Rimmel, Catrice, Barry M and 17 are all very affordable options. 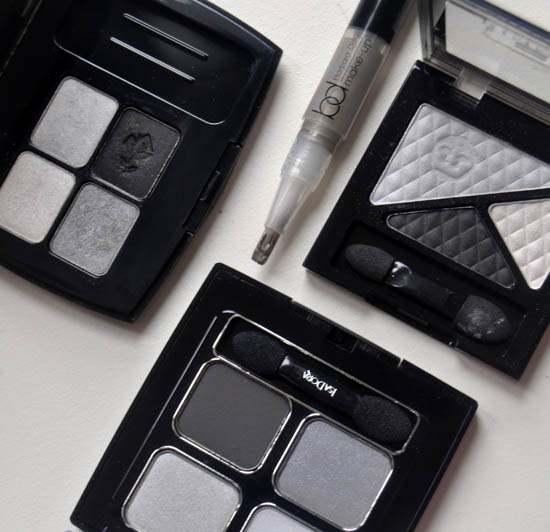 I've got some trios and quads in the colour too, just for a birra variety. 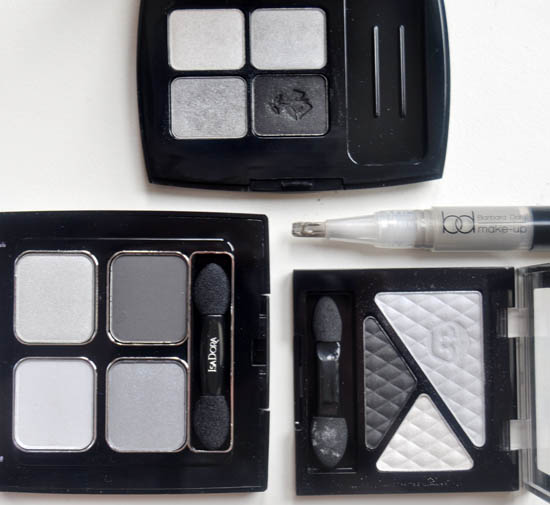 On top is a Lancome Ombre Absolute Palette in Intemporel Smokey, to the bottom left is an IsaDora quad in Silvery Grey, which I picked up in the chemist for €12.95 to see if it was any cop. It is as it happens - a whisper under €13 is decent odds for four nice colours and here's a tip - buy the brand's quads over its duos, which come in at €10.95 - as they clearly represent better value.

The trio to the bottom right is Rimmel Glam'Eyes Trio Eye Shadow in Twilight Zone (we've checked this one out before on the site) and above it is a Barbara Daly Easy on The Eye Shadow Pen in Willow.

Swatches, you say? Why certainly: 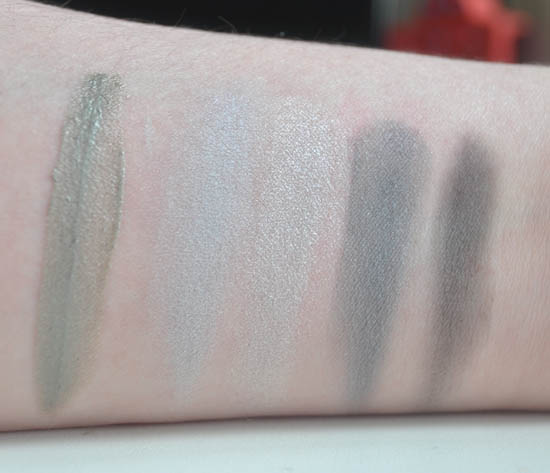 Fr0m left to right we have the Barbara Daly Easy on The Eye Shadow Pen in Willow and then the swatches from the IsaDora quad in Silvery Grey. These feel creamy and swatch nicely - and I'd say this offers decent value for the price. 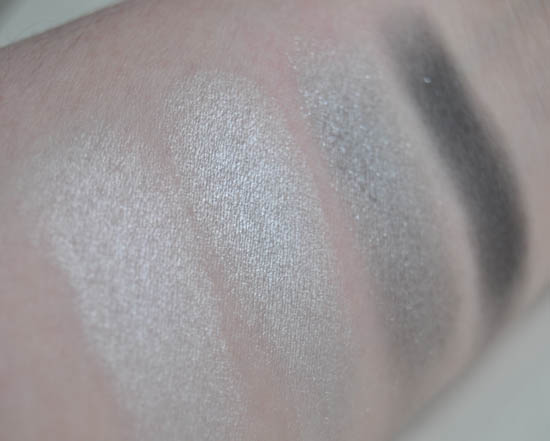 And here are the swatches from the Lancome Ombre Absolute Palette in Intemporel Smokey. There's not a lot to say about this very reliable little piece of kit - it's not cheap but very good quality and makes for a great smokey eye. The greys are also lovely when worn solo. 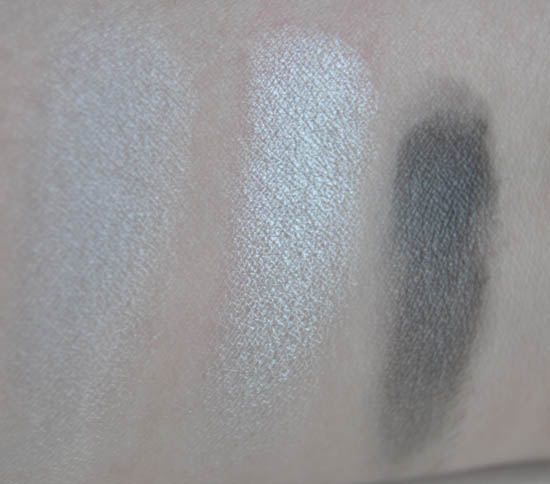 Lastly, the Rimmel Glam'Eyes Trio Eye Shadow in Twilight Zone swatches. These are sheerer than the others and a little powdery - that's reflected in the pricepoint (these cost €7.95) and they definitely benefit from primer or a shadow base.  As an affordable, accessible option, this is worth considering.

So, that's yer lot.  Do you like the look of anything, or perhaps you're already the proud shadow-mammy of one of the above? To the comments!