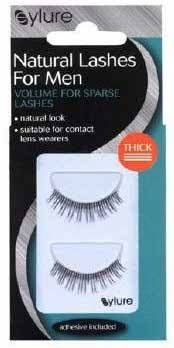 I was prepared to allow them a lick of concealer, a smudge of guyliner, even a flick of manscara. But this male grooming thing is rapidly descending into madness - madness, I tells ya! - as news comes in that Eyelure, those purveyors of false eyelashes, are set to launch a new Natural Lashes for Men line in September. Available in either 'Fine' or 'Thick', depending on how dramatic a flutter he's after, they have a barely visible clear strip along the base to do away with the horror of a tell-tale lash line. Amazon and Harrods are the two confirmed stockists so far, who'll be flogging these false eyelashes for fellas for £5.45 of the Queen's finest pounds.

What the feck next, seriously?